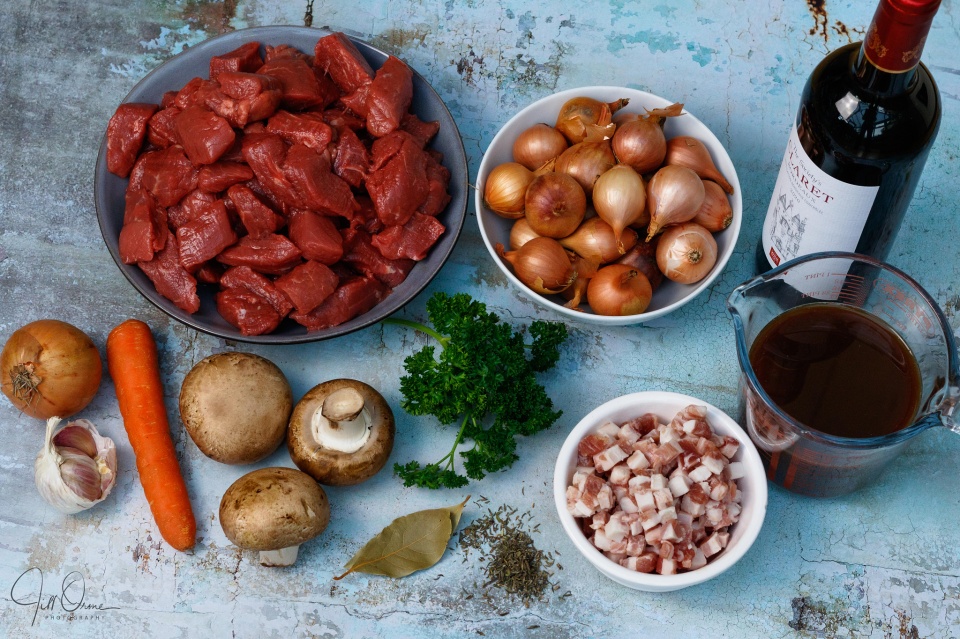 Apologies to the vegetarians in the room.

On winter Saturdays I quite often make a casserole in the slow cooker, keeping some of it aside in the fridge for Sunday lunch, and portioning the rest for the freezer. Today, though nowhere near as inhospitable as yesterday, was still pretty wintry, and I decided to dig out an old recipe and see if I could adapt it for slow cooking. The beef Bourgignon recipe I use goes back almost fifty years, at which point in time the dish was fashionable and chic, and I used to receive much admiration whenever I served it. Over time it fell out of fashion, and as originally written it’s a bit of a faff, so gradually I stopped making it, but as the slow cooker did its work this afternoon and the aroma filled the house, I was glad I’d decided to resurrect it.

This is the original recipe, which claims to serve six, though I’d say it will easily go round eight people:

With a sharp knife, cut off the bacon rind and reserve it. Cut the bacon into strips ¼ inch thick and 1½ inches long. Place the bacon strips in a medium-sized saucepan and cover with the water. Bring the water to a boil over moderate heat, then reduce the heat and simmer gently for 10 minutes. Drain off the water and dry the bacon strips on kitchen paper towels. Preheat the oven to very hot 450°F (Gas Mark 8, 230°C).

Over moderate heat, reheat the fat in the casserole until it is very hot. Add the beef cubes a few at a time and, stirring occasionally, brown them quickly on all sides. As the cubes brown, transfer them with a slotted spoon to the plate with the bacon. Add the sliced carrot and onion to the same fat and saute them quickly over moderate heat for 5 minutes, stirring occasionally.

Stir the wine, beef stock,  tomato paste, garlic, thyme, bay leaf and bacon rind into the casserole, and bring to simmering point over moderate heat. Cover the casserole and put it in the lower part of the oven. Cook for 3.5 to 4 hours, or until the meat is tender when pierced with a fork. While the meat is cooking, prepare the onions and mushrooms.

When the meat is tender, place a strainer over a large saucepan and pour the contents of the casserole into it. Rinse out the casserole and put the beef and bacon back into it. Discard the bay leaf. Add the onions and mushrooms and keep hot.

Skim any fat from the strained sauce and simmer it over moderate heat for 2 minutes. If the sauce is too thin, boil it rapidly to reduce and thicken it. Pour the sauce over the meat and vegetables. Sprinkle with chopped parsley just before serving.

My adaptation today began with using cubed pancetta instead of bacon, which I dry-fried until it released its fat; I then fried off the meat and sliced vegetables in this, before adding the rest of the main ingredients – though less stock and wine than I would have used for cooking in the oven. I cooked this mixture on the slow cooker’s low setting for six hours, adding the braised shallots and fried mushrooms for the final hour. No straining at the end, and no sauce reductions needed – I just threw in the fresh chopped parsley and allowed the casserole to cool before refrigerating some and freezing the rest.

I shot this image of my legacy dish using a legacy lens – my old nifty fifty, which isn’t stabilised, and makes a slightly alarming noise as it focuses – because that happened to be the best focal length for the job in hand. When I mentioned it to R though, his response was, “What is this – retro Saturday?”