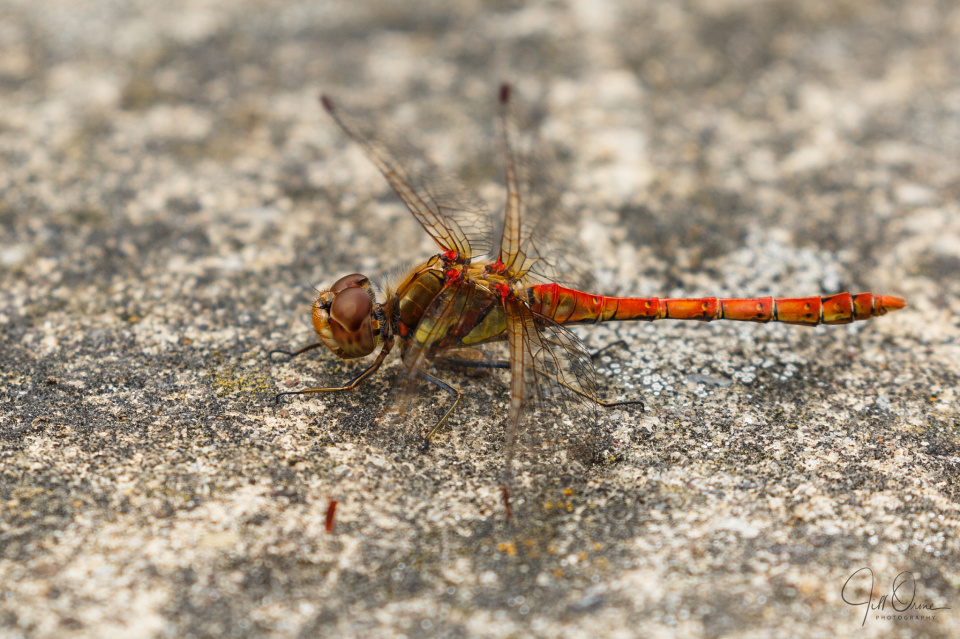 My Twitter feed has been full of references to today being National Relaxation Day – apparently an actual thing, though I suspect an American rather than a British one. If you search the Interwebs you’ll find a gazillion sites explaining ways in which you might relax, but I would say: get a camera, walk out of the house, find something that interests you or pleases your eye, and take some photos of it. It certainly works for me – in fact, there are some days when photography is the only thing that effectively takes my mind off the political chaos in the country, and the general awfulness of much of what seems to be going on in the world at large.

In the spirit of putting in the minimum possible effort today, I graciously allowed R to take me to Broadway for coffee and cake, and then asked him to stop by the pond in Willersey on the way home, so that I could walk a mere handful of steps to look for a dragon or a damsel. Despite the rain we’ve had over the past couple of weeks, the pond was even dryer than on my last visit, and the small amount of water that remains was positively seething with a concentration of aquatic things (including, I do hope, the larvae of the pair of Broad-bodied Chasers that I saw breeding there four weeks ago). Today there was no sign of the Chasers, but this Common Darter was celebrating National Relaxation Day by resting on the paving at the pond’s edge. Every few seconds he would take off and circle, but then remember that he was supposed to be relaxing and come back down to earth, allowing me to capture photos of him from several different angles over just a few minutes.

The defining characteristics of this species are pale stripes down the centre of the legs (which put me in mind of those dark shirts with a pale skeleton printed on them); brown upper sections to the eyes; faint yellow shoulder stripes; and wings that are mainly clear, but with small patches of yellow at their bases and reddish pterostigmata. Because he’s male his abdomen is crimson, and he has two large yellow panels on the sides of his thorax; his mate, if he had one, would be mainly ochre.

And now I’m going to meditate. I wish you all a relaxing evening.