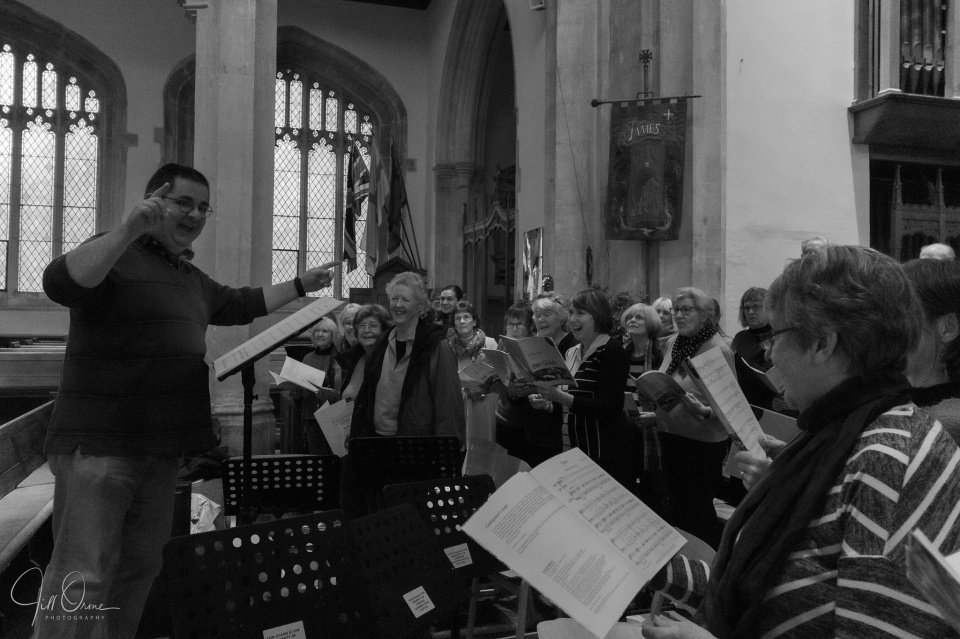 Today was performance day for Chipping Campden Festival Chorus – a programme largely made up of C20th English church music. It hasn’t all been easy to learn, and this afternoon, when we had our only rehearsal with the brass quintet who were to accompany some of the pieces, we discovered that several choir members had been overtaken by illness or family events over the last couple of days, and wouldn’t be singing. Accordingly everyone was a little on edge.

I run the choir’s Facebook page, and it has been bothering me for a while that the header photo still showed us working with our old Musical Director, who retired about eighteen months ago, but I haven’t had a chance to take a replacement. Today wasn’t really a good opportunity either, because the weather was foul and the church interior about as dark as I’ve ever seen it, but I decided to have a bash, as we say in the world of choral music. The Director suggested that I should just leave my place and wander around to take photos as the choir worked, but this would have deprived me of practice that I felt I needed, so I asked for a quick posed shot – which explains the amusement some of the sopranos are showing here, as the Director took up a stance literally no-one has ever seen him adopt during actual conducting. Most of the photos went in the trash almost as soon as I uploaded them, but converted to mono this was just about good enough to use – at least until the summer, when the light will be better, and the choir less swathed in dark coats and scarves, at which point I’ll have another run at it. I’m referring to it as a placeholder.

The concert went pretty well in the end, and the lovely Chipping Campden audience was as supportive and appreciative as always. We now have a week off before starting on our spring season piece: Carmina Burana, by Carl Orff. I’ve never sung it before, and I’m very much looking forward to learning it.