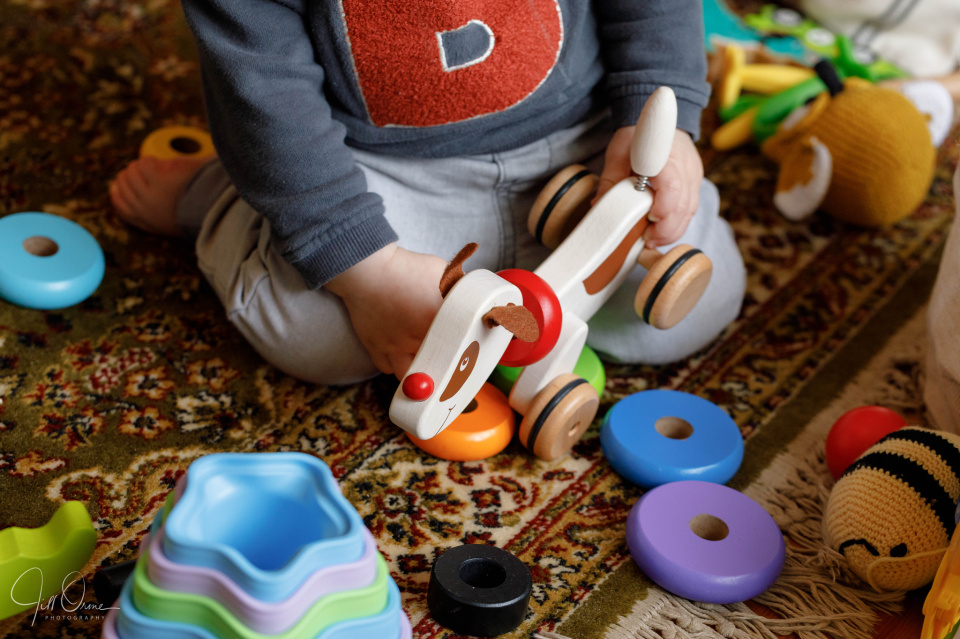 Baby B’s toys never know quite what they’ll be getting up to next. One second after I took this photo, dog was lifted up by his cord lead and waved around B’s head like a mace – so it’s lucky that my macro lens didn’t interrupt his trajectory, and also that B didn’t let go of the cord.

R and I had an excellent day with the Boy Wonder, who seems to have gone through a step change since we saw him last week. He’s more definitely and precisely vocal, and clearly wants to be able to say far more than he can right now. He’s also virtually walking, so the days of being able to predict even approximately where he’s got to if you take your eye off him for more than a second are now numbered. He’s continuing to devise little games of his own, but absolutely loves to share jokes and tricks – he has a special laugh on a crowing in-breath that sounds like the squeaking of a rusty door hinge, often accompanied by a sly sideways grin, that means he knows he’s being funny, and he’s delighted that you’re in on the joke.

He and I blew raspberries at each other for several minutes this morning, and I have a long run of photos in which R (who was carrying B at the time, and was getting quite damp from the fall-out of this game) was almost crying with laughter at the performance we were putting on. The joke became slightly less funny a little later on, when B tried blowing some more raspberries with his mouth full of milk… but the star performer soon managed to get his audience back on side.