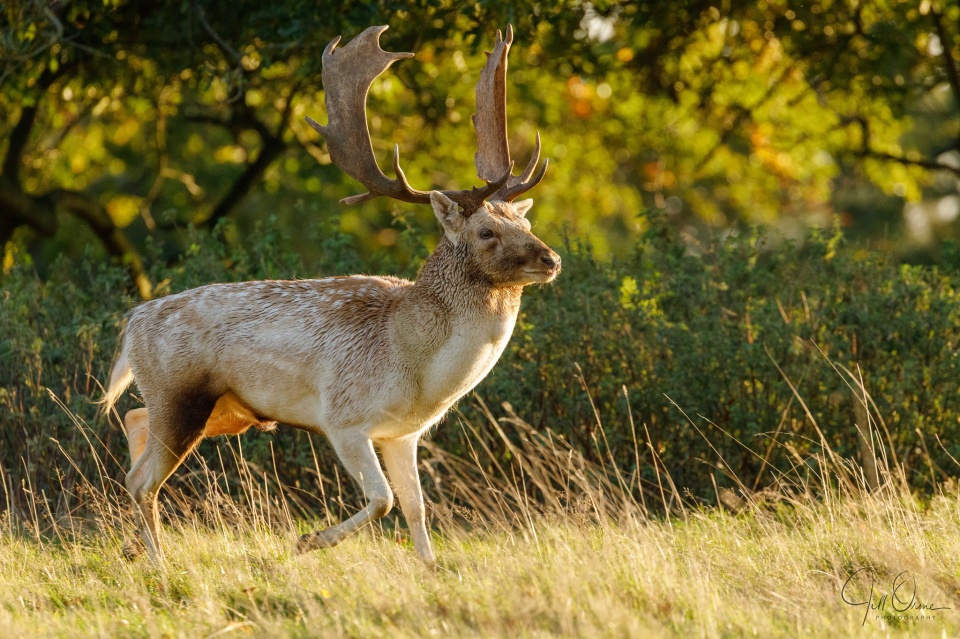 The rut is getting into its stride at Charlecote now. Alpha bucks are stamping around shouting like Vogon captains, rounding up females and chasing away yearling males; does are getting flirty and ignoring their fawns, which are wandering around making plaintive little cries like lost cats; and the old guys who know they can’t compete this year are finding quiet spots in which to maintain a low profile and not excite anyone else’s ire. Most of this tends to happen at quite a distance to the human visitors to the estate, and is most easily seen through binoculars or a long lens, but you can’t fully rely on not getting in the way of a rampagious male, and need to keep your wits about you.

During my walk around the Home Park I encountered more humans than deer. I had a silent disagreement with a man who was explaining to his daughter why the large white heron flying overhead was a little egret rather than a great white (I took photos and later proved myself right), and watched disapprovingly as a chap with a mobile phone camera marched right up to the old buck I photographed last week, scattering his shrinking harem, and clicked the camera almost in his face (he got away with it, though it would have served him right if he hadn’t). I also had a charming conversation with a four year old moppet who accosted me as I was heading into the garden en route to the café:

[All of this while her grandmother pulled silent ‘sorry’ faces at me over the top of her head.]

After a coffee break I decided to walk around the West Park, not expecting to encounter much other than Jacob sheep, because what looked like most of the fallow herd was gathered in the Deer Park across the river. However, a few yearlings were being charged so aggressively by the alphas that they swam the river to get to safety, and came out quite close to me, and a handful of does followed them over, presumably because they’re not yet in oestrous and they’re fed up with being chased around and yelled at.

I was then startled by the unmistakeable sound of grunting quite close by, and just as I worked out where the noise was coming from, two big bucks and one sightly younger one began to chase the yearlings and does, on a course parallel with the path I was walking. They very quickly disappeared from view, so I turned and cautiously retraced my steps – only to have this alpha male step out of a large clump of nettles and head back towards me. My strategy during the rut is always to stick to the official paths, and always to be aware of where the nearest tree is – I hope that even in a testosterone haze the bucks will think of well-trodden paths as human territory, and I assume (though I hope never to test the theory) that if you put yourself behind a tree, a buck will lose interest in you rather than bothering to chase you around it. Nonetheless, I confess that my pulse rate did shoot up at this point, and I stood completely still (apart, obviously, from taking photos), and almost held my breath. The buck marched across to the path, crossing it about mid-way between me and a man who’d been walking behind me and was now also standing stock-still and looking less than relaxed, and disappeared off down the hill towards the river.

R has chosen this photo, partly because he likes the way the late afternoon light is falling on the buck’s head, and partly because the image – which isn’t cropped – contains all of him. By the end of the sequence he was too close to be completely in the frame.