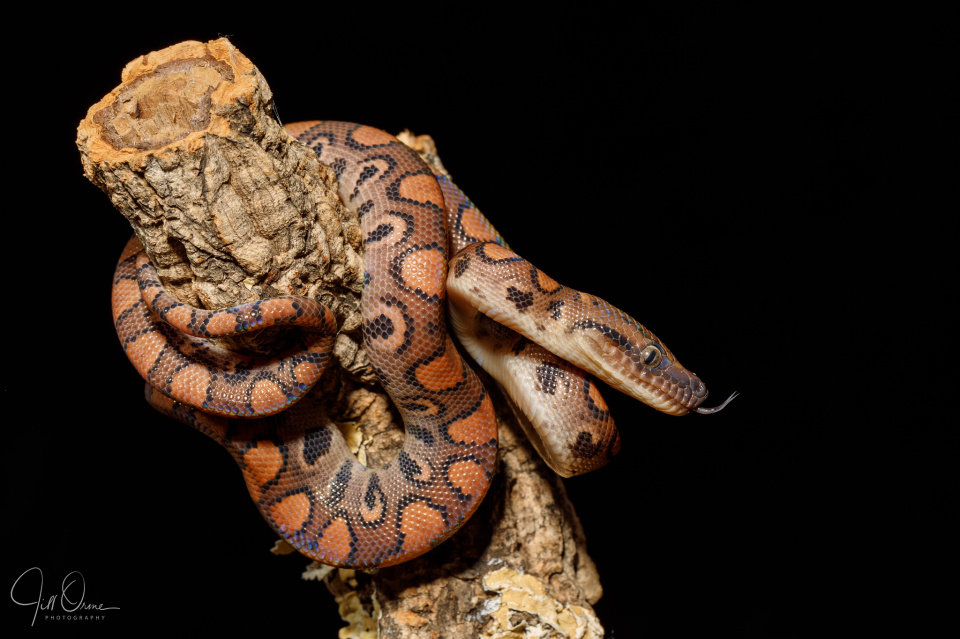 Not especially easy to say after three hours sleep, a six-hour workshop, a one hundred and twenty mile drive, and two glasses of wine… but still. I’ve had an absolutely marvellous day, and though I’m still not sure if these are the two best photos  to represent it, staying up all night going through all my images probably wouldn’t be the best idea – so I’m going with the two I thought of while I was driving home.

I’m delighted with this shot of a little rainbow boa constrictor because I managed to catch his tongue flicking, and the rainbow iridescence that gives him his common name. He’s still quite young; as he gets bigger the effect will become more pronounced, but I rather like the fact that at the moment he just has rainbow accents. There are some quite interesting facts about these beautiful snakes here. 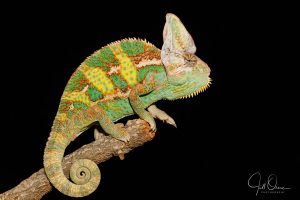 The extra is a wonderful veiled chameleon, demonstrating a fabulous curl of his prehensile tail, while (being somewhat grumpy by nature) apparently suggesting that I talk to the hand. There’s a memory tugging at the back of my mind from childhood – I think it may have been a cartoon, in which a chameleon is reduced to a quivering wreck by being placed on tartan and having to try to blend in with it; but it seems to me that this one has got the tartan look pretty much cracked. I also have to report that they don’t change colour as a means of camouflage, but as a function of their mood: this one became more or less spotty, depending on whether he was enjoying or being irritated by the attention of his humans.

My sincere thanks for these photos and many, many more go to Roy and Geoff of Chameleon Photography in Surrey, who worked so hard today that I think they must be at least as tired as me. They were charming, hospitable, knowledgeable, and did some good photography teaching as well as providing an excellent animal encounter experience. Over the course of the day the two of us taking the workshop photographed several chameleons and geckos, spiders, a scorpion, two mantises, a ginormous millipede, a bearded dragon, and three different kinds of exotic frog; which probably gives you some idea of how many photos I’m going to be processing over the next few days! If this kind of photography is your bag, I really can’t recommend their workshops too highly.