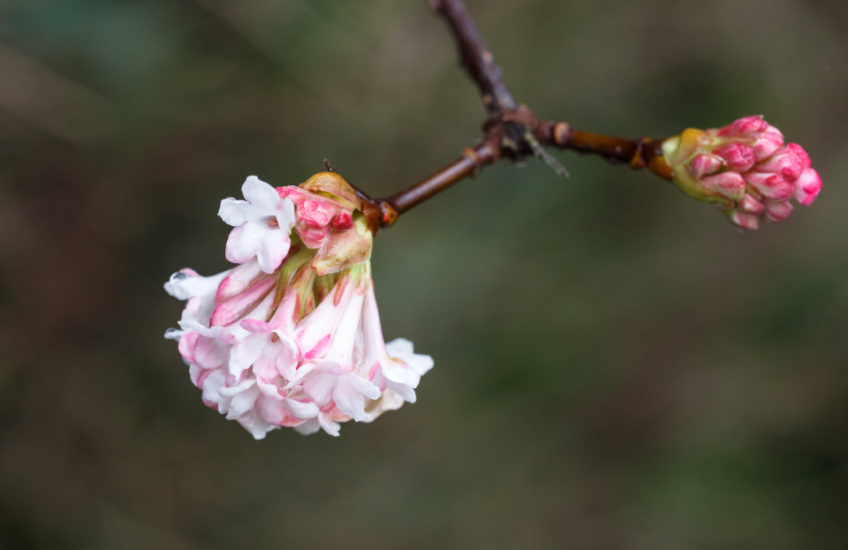 I have two very large shrubs in the back garden, similar but not identical, and both planted by a previous occupant. I’m very unsure about the identification of either of them, even when I have leaves to examine; but given that this one flowers in the middle of winter I’m taking a punt on it being a Daphne. It’s currently absolutely laden with blossom, though much of it is slightly frosted, so I had to dig around towards the back of the shrub to find some that was undamaged.

I spent most of the day trying to catch up with Stuff, though I did go on a little road trip this afternoon in the rather odd courtesy car I was left last Friday by the body repairers, so that when I went out to BGCC in the dark this evening it wouldn’t be my first time driving it. I can’t wait to get the MX-5 back – they might be done with it by tomorrow, and when I get the call I will be offering to go straight over to Tewkesbury to collect it (not least because the stress of watching someone unfamiliar with the breed get into it, fail to start it, and then start and immediately stall it, almost induced a full-blown panic attack).

I scored a first, a commended and a highly commended in the Little Girls’ Class this evening, which was almost pleasing enough for me to forgive the judge’s quite harsh criticism of my fourth offering. Though not quite. It was my snowy Millennium Bridge shot from last Thursday which won, and I was happy about that because it had felt a little risky to enter it at all. LooseCanon, who won the Big Boys’ Class, was chatting with me afterwards, and we agreed that blipping is definitely helpful when it comes to competitions – if only because it gives us such a huge body of work to choose from. Though having said that, faced with a large choice of anything, from biscuits in a supermarket through to digital image files, I become quite ridiculously indecisive – and the wider the choice, the more I haver. So the fact that the third round of club competitions is only a couple of weeks away is not a thrilling prospect for me: I’m feeling slightly neurasthenic already.