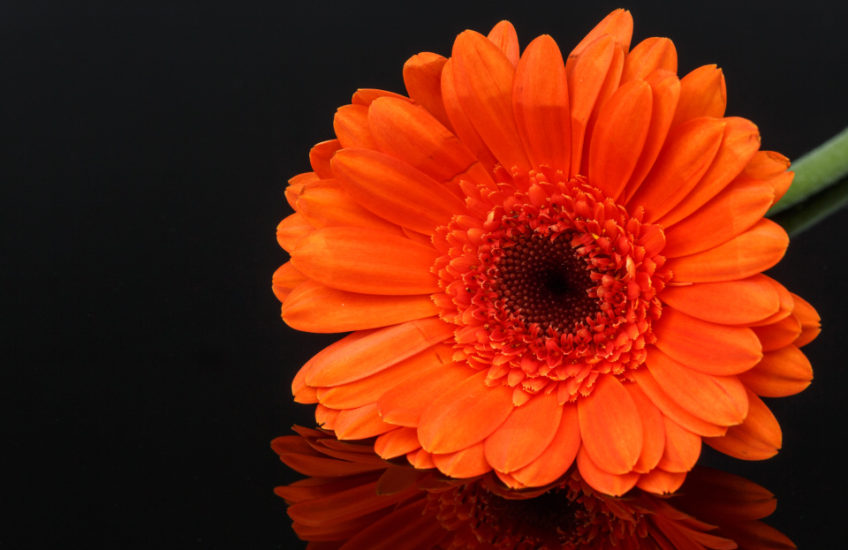 Orange is a tricky colour, I find – you’d look for a very long time before finding any in my wardrobe. I like it against black or Mediterranean skin, but set against my faded northern European tones it wins hands down – in fact it makes me look as though I’m fresh back from the embalmers.

I also find it quite hard to photograph well; but these days I’m inclined to take that as a challenge, so when I was casting around this afternoon for a photographic subject and my eye fell on a vase of brightly coloured gerberas, I decided to play with one of the orange ones to see what I could achieve with it. (If I’d been wearing my glasses at the time I’d have chosen an orange one with less damage to the petals, but let’s step around that.) I snapped it on various surfaces: matt white, matt black, dull silver and this sheet of black perspex, and it was interesting to see the effect that each of them had on the apparent colour of the petals. I had my white balance on auto (unusually), and though the colour came up pretty true against the white and silver backgrounds, both of the blacks threw it completely out – when I uploaded this file although the exposure was fine the gerbera was brown and the perspex blue. I will have to ponder why that might have happened – and maybe have a chat with Emma Davies about it.

After taking my photos I noticed that the bird feeders were empty, and while I was out in the garden filling them I spotted the tiny chap in my extra – which I think is a Bank Vole. 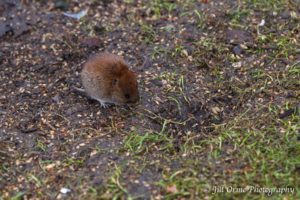 A 90mm macro lens on a full-frame camera wasn’t the ideal combination for photographing it, but that was what I happened to have to hand, so I made do. In the event I got close enough for a few reasonable shots, because the vole’s imperative this afternoon was searching out food, and though wary, provided I moved slowly it was prepared to risk my presence. Having stalked it for several minutes (I even went back to the house and fetched the Big Lens, and came back out to find it still eating), I found myself very emotionally engaged with it; and sad at the knowledge that, faced with the combined threats of cold, starvation and predation, it’s unlikely to make it through to the spring.

It was choir practice this evening, and we were working on two C20th pieces which we haven’t performed before: Poulenc’s Gloria, and Britten’s Rejoice in the Lamb. I’m starting to appreciate the Poulenc, though it’s not easy; but the Britten leaves me pretty cold – the music is tricky and the text is almost unsingable in sections. It’s a setting of part of a long poem by a man called Christopher Smart, who was an C18th mystic poet, and frankly quite barking – he was in an asylum when he wrote this piece, which concerns the worship of God by all living creatures and includes a lot of animals, including a cat called Jeoffry. It is, of course, easy to sing things that you love and want to make other people enjoy, and much tougher to present something well that you don’t like – but I’m not one of those singers who ducks out of a choral season because they find the music difficult, and I’d already decided that if I couldn’t learn to love the Britten I was just going to have to buckle down a bit harder than normal and concentrate on doing the best job I could with it. And then while I was flicking through it this evening, looking for the section we were going to practise, my eye fell on the opening of the alto solo:

And I had a sudden image of the tiny Bank Vole determinedly collecting seed while a huge human got closer and closer to it with a camera, and my eyes filled up with tears. It’s a good job that someone else is going to have to sing that section, and not me.