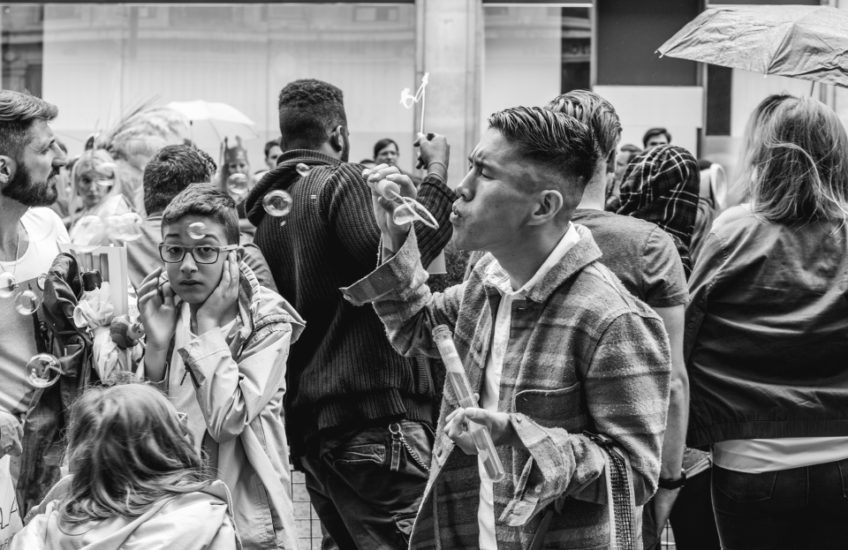 Some of you may be aware that in a former life I trained as an osteopath, and though the rheumatoid arthritis that ripped through my system in the run-up to finals robbed me of the opportunity ever to practise it I’ve kept in loose contact with my classmates over the 28 years since we graduated. Today the seven of us who went through the entire five years together (out of thirty five who started in our group, and not including two people who joined us later in the course and never quite achieved full Musketeer status) assembled in Central London for lunch and Competitive Talking.

I was nervous about it beforehand, I must admit, because the other six have had very successful careers, which I knew would trigger feelings of sadness and even envy in me as I listened to them talk about the things they’ve done – but they were all sensitive to that possibility, and I felt very safe in the midst of the group. We went through a lot together during training, some of it difficult but much of it (at least in hindsight) funny – and there was a lot of “Do you remember the time when…?”, and much laughter round the table. Looking round at them, and listening in amusement, admiration and sometimes amazement to their stories – books written, teaching delivered, charitable institutions founded, relationships made and dissolved, children and grandchildren produced – I thought about how much the experiences we had in taking that course changed all of us, and how glad I am that I did it. In fact the only thing I would change if I could is to have looked after myself a little more and not broken my own health – but people have worse things to deal with, and on balance I count myself very lucky.

When we left the restaurant five of us walked northwards together to try to find C (who lives in Somerset) a taxi to get her to Paddington Station for her train home. Almost immediately we found ourselves mixed up with Pride in London, and until we finally ditched the taxi plan in favour of getting onto a tube train I kept holding everyone up by stopping to take photos. Sadly, I missed what would have been the money shot: in among thousands of happy, tolerant and good-natured people there was a little group of grumpy ones, gathered around the statue of Eros in Picadilly Circus with banners saying things like NO CORPORATE TAKE-OVER OF PRIDE!!!, and NO MILITARY INVOLVEMENT IN PRIDE!!! NO RED ARROWS FLY-PAST!!! – which had we been there five minutes earlier I could have photographed with the Red Arrows doing a fly-past overhead – but such is life. It obviously wasn’t my day for making a small fortune by selling a photo – maybe tomorrow will be better.

This was taken just before we got to Oxford Circus tube – I saw that the guy in the checked jacket was about to start blowing bubbles, and grabbed a quick snap, but I didn’t notice the boy watching me until I uploaded the file. It’s R’s favourite of my shots today, and though I don’t quite know why I really like it too. My other favourite is the extra, showing people reacting to a sudden sharp rain shower; the two figures on the left of frame are osteopaths, which shows you what a hardy bunch we are. 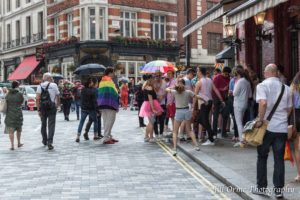