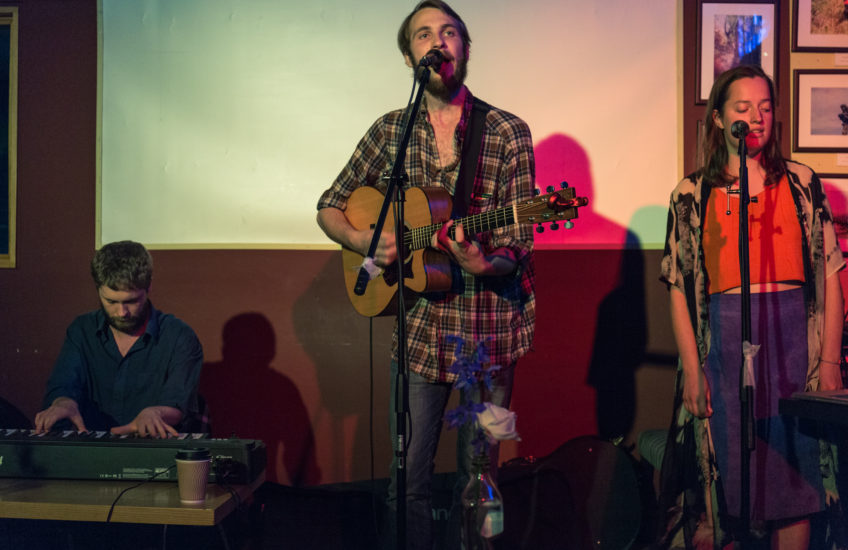 It’s very unusual for R and me to have a house full these days, but tonight we will be bursting at the seams. Both Offspring have come home for a slightly belated celebration of R’s birthday; and Child Two has brought his band with him – not to help with the celebration (though they did create a lovely mash-up of last week’s audiences at various venues singing Happy Birthday to You, and posted it to his FB page), but because they’re part way through a tour.

If you’ve been paying attention you’ll know that they played Sheffield last Thursday; on Friday they were in Cambridge; yesterday night they played a small festival in Northallerton, and tonight they did a set at The Picture House in Stratford. Tomorrow they’re taking a day off; but on Tuesday they’re in London, then Frome on Wednesday and Bristol on Thursday, before finishing in Brighton on Friday. At which point I would think that they’ll need a holiday.

When I told Child Two over dinner that I would be taking photos at his gig, he said that on a scale of one to him noticing me doing it, he would prefer me to keep it down towards the one end of the scale. Cheeky so-and-so. After all I…. etc., etc. Anyway, I did my best to be unobtrusive – though that’s slightly difficult with a huge DSLR, obviously – and to overcome the ghastly lighting. Sadly there was nothing I could do about the backdrop.

So – the large beardy one in the middle is mine – I’d like to give you an extra from when he was about six, blonde and adorable, but he’d probably kill me. On the left is Mr Matt Aplin – a fine keyboard player even when he forgets to bring his keyboard stand; and on the right Ms. Georgie Buchanan, who put in some gorgeous harmony vocals. This was taken during their penultimate song; they finished with my favourite, which is called Apology Song. If this kind of thing is your thing, you can keep up with them here.