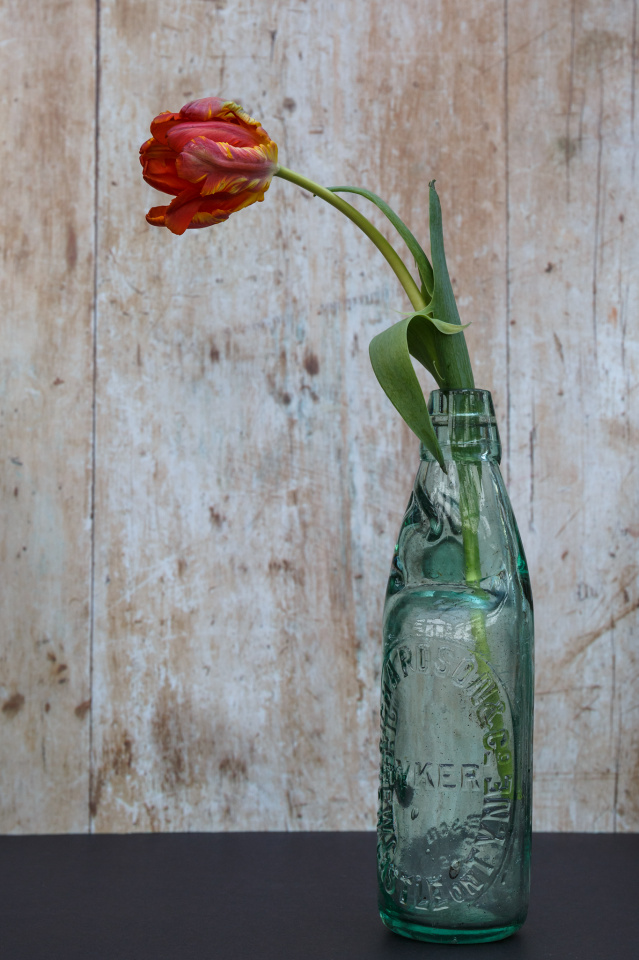 I’m not sure where today disappeared to, except that I slept better and woke later than normal. But I was fully functional and appropriately clad by 10am, when the decorator arrived to size up a few jobs we need doing. By the time he left after measuring everything up (and R noticed what kind of car he’s now driving), we’d pretty much given up thoughts of retiring any time soon.

Would you say I’m too old to train as a painter and decorator?

Anyway, I then did some on line shopping – I needed to replace my hair dryer, which blew up and fused the house the last time I used it; and our land-line phones are now so old that they tend to stop working part way through a conversation, so I’ve also ordered a new set of those. Then R and I went to run errands in Stratford – starting at one of the antiques barns, because I had a yen to pick up some old bottles for arty flower shots like this one. It didn’t seem to me that it took very long to tour the barn, choose some bottles and pay for them, but as we moved on towards Waitrose, I suddenly realised that it was 2pm; and by the time we’d picked up a couple of items at the supermarket, popped into Boston Tea Party for coffee and cake, and swung round via Evesham to get some stuff for R to make a pelmet for the window next to my desk, it was after 4.

Actually… now I look at all that, it probably was a day’s-worth of stuff, even if it didn’t feel like it at the time. That makes me feel less unproductive.

This, if you’re interested, is one of those old lemonade bottles with a marble in the neck. R asked why they had marbles in the neck, and I had to confess (through gritted teeth, because I don’t like to see my Oracle status in any way diminished) that I had absolutely no idea. However I now know, courtesy of Wikipedia, that the marble was forced upwards against a rubber seal by the pressure of gas inside the bottle, thus effectively sealing it. They’re called Codd bottles after the British company Hiram Codd, which invented and patented the design in the C19th.