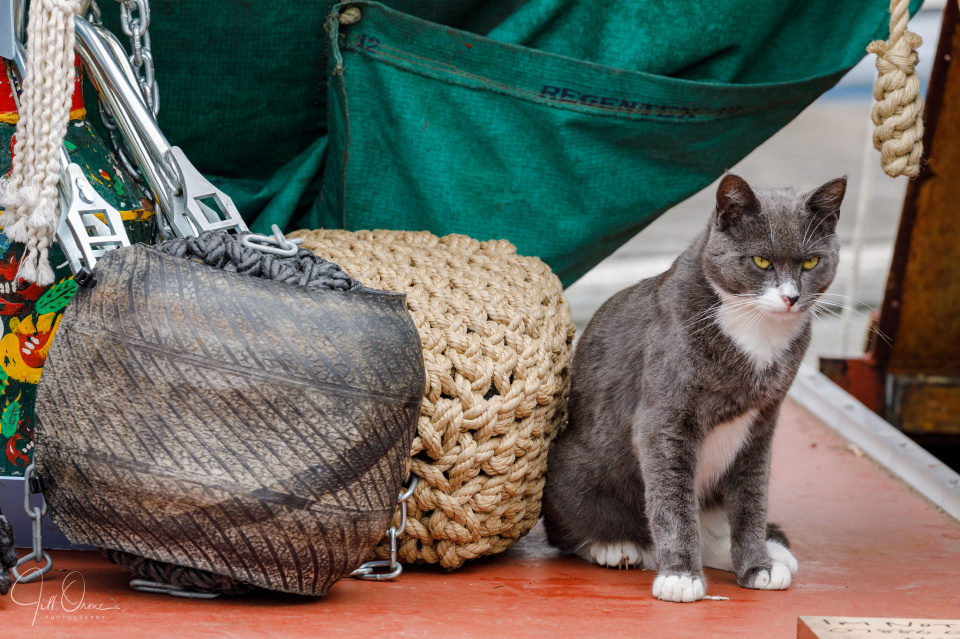 After another Lightroom-heavy morning of back processing (please do take a look at my red squirrel from Wednesday, if you haven’t already seen it – because squirrels), I went off to Leamington Spa this afternoon to exchange my dud camera battery, dropping R in Stratford en route so that he could run some errands, and meeting up with him later for coffee. And absolutely not cake – oh no, definitely not, given the amount of weight we both managed to stack on while we were away last week. Ahem.

Anyway, after coffee, we walked back to the car along the south side of the river, and as we were strolling past the canal basin I saw, firstly the inscrutable chihuahua that I photographed a few days ago, still nesting in its lifebelt, but with an extra blanket today that it was wearing like a cloak (and looking if anything even more like Yoda – I’m grateful to my sister-in-law for pointing out the resemblance); and then, a couple of barges further along, this rather pretty cat. I wasn’t the only person on the quay making stupid cat-attracting noises to try to get its attention, but the cat, which was washing itself, resolutely ignored all of us for several minutes. When it did deign to straighten up and cast a glance in our direction, its expression was Not Encouraging.

So I think I can reasonably say that this is the second post of a (hopefully) occasional series in which I’m told to naff off by domestic animals on boats.