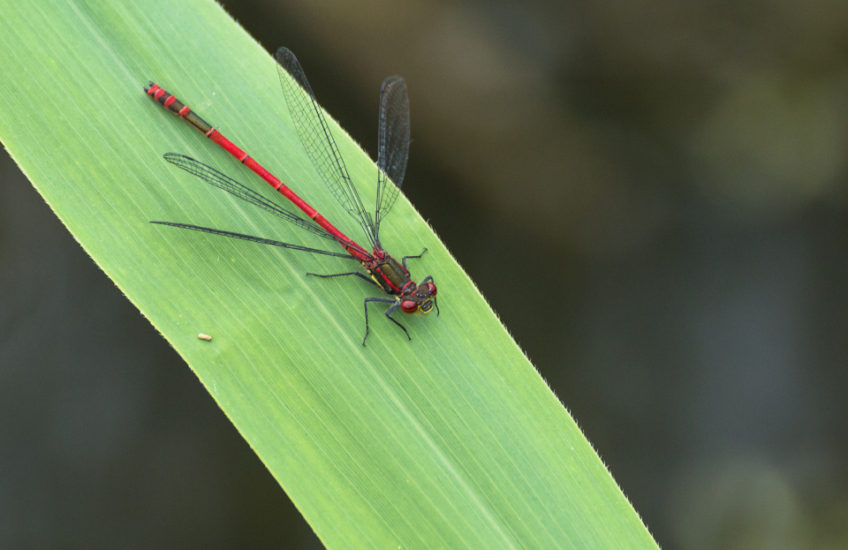 After dropping off the final documentation for my car number plate transfer at the garage in Coventry, and waiting while they made new plates for my old car and fitted them (really, DVLA? Are you perhaps trying to make this process so tedious and involved that people will decide it’s too much trouble, so that you can take the plates back and re-sell them?), I expunged my irritation by taking a walk around Brandon Marsh Nature Reserve, which is just a few minutes drive away.

I was only there for a couple of hours, but came back with a haul of photos which has taken me all evening to process. Worryingly I only saw two species of butterfly, but I spotted four different types of damselfly and one dragon – a Broad-bodied Chaser, which I’ve added here as an extra. The main image is a Large Red Damselfly – which is only Large in the sense of being bigger than the Small Red Damselfly: in absolute terms it’s pretty small and you have to have your eye in to spot it, especially when it’s flying over muddy water. Helpfully this one was resting on a reed, though sadly the sun was behind a cloud at the time – in sunshine the thorax and the stripes on the further segments of the abdomen are glittery gold. 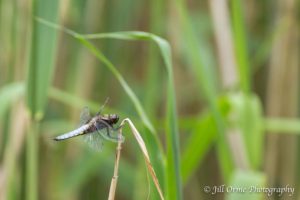 The Broad-Bodied Chaser by contrast is not small – it’s quite a chunky little chap, and very territorial, so this one spent a lot of the time I was there very obviously zooming around its little bit of pond, checking for interlopers as well as for laydees. You can tell that it’s male by the pale blue bloom on its abdomen – which I remember as “prunosity” because it’s the same thing you see on the surface of plums, but the word is actually “pruinosity”. There’s some more information about it here, including a great sequence of photos of the imago emerging.

I hope that I’ve fulfilled WWombat‘s brief that today’s Tiny Tuesday entries should connect in some way to the weather or the season: both these insects are definitely seasonal, with the Large Red flying from April to September, and the Chaser being seen mainly in May and June. It’s both sad and rather touching to be a member of the UK Dragonflies & Damselflies Facebook group during the winter, when members bemoan the lack of Odonata, count down the days until emergence might begin, and search their archives for nice photos to post to keep everyone going through to the spring.

On the subject of Facebook, I’ve done an album of some of my photos from today, which if you’re interested can be accessed here.