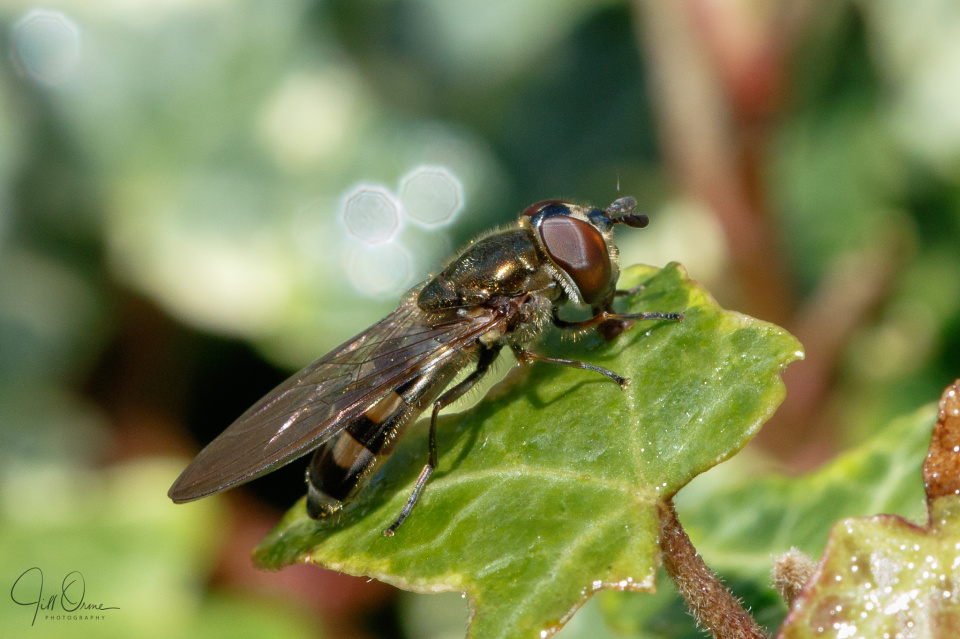 When I first got into this daily nonsense, hoverflies were my gateway drug to a growing obsession with trying to photograph, identify, and learn more about invertebrates. Over time I became inclined – at least in the middle of the season – to cast a more experienced eye over a hoverfly, say, “Just a Platycheirus,” or, “Just a drone fly,” and move on in search of something more exciting, but last year I made a determined effort not to do this, and ended up with my best ever annual hoverfly species count. And this year – which only started, hoverfly-wise, on Tuesday – has already come up trumps.

This is a female Xanthandrus comtus, a species I’d never recorded before, photographed this afternoon on the ivy overhanging the old farm wall that borders our yard. Falk says of this species:

“A large, long-winged relative of Melanostoma, with very distinctive abdominal markings in both sexes (which are patterned rather differently to one another as in Melanostoma). This is a strongly migratory species that may be starting to overwinter in Britain judging by some recent spring records, but with the British population clearly reinforced by immigration. The adults are most typically encountered at woodland edge and in scrubby habitats. The larvae are predators of semi-gregarious micro-moths on shrubs and certain herbs.”

So, as well as this being a first record for me – and, it was pointed out to me when I posted the record to the Hoverfly Recording Scheme this evening, probably a new dot on the species distribution map – it’s a piece of evidence in support of the supposition that Xanthandrus comtus may now be resident in the UK. I love citizen science!

All of this makes this fairly unspectacular hoverfly interesting enough to be worth noting in my journal, but there are two other things I’d like to note here as well. Firstly, I’d baited the ivy with sugar spray, which is an old entomologists’ trick for attracting nectar feeders to a particular spot. (Apologies to any old entomologists in the audience.) This was my first serious attempt at using the technique, and I had excellent results, so I’ll definitely be playing with it some more – at least until there are a better number of nectar-producing plants in flower here. And secondly, although I researched it myself afterwards, and then had the identification confirmed by the experts, I got my initial ID on this fly from an app, after failing to spot a really obvious match in my hoverfly guide. Identification apps don’t have the best reputation, and I’ve deleted several that have failed to live up to the claims their authors made for them, but there are two I think are worth keeping: Seek, which is pretty good for flora, though less accurate on fauna in my opinion; and Obsidentify, which declared this to be Xanthandrus comtus “with 100% confidence”, and turned out to be correct.