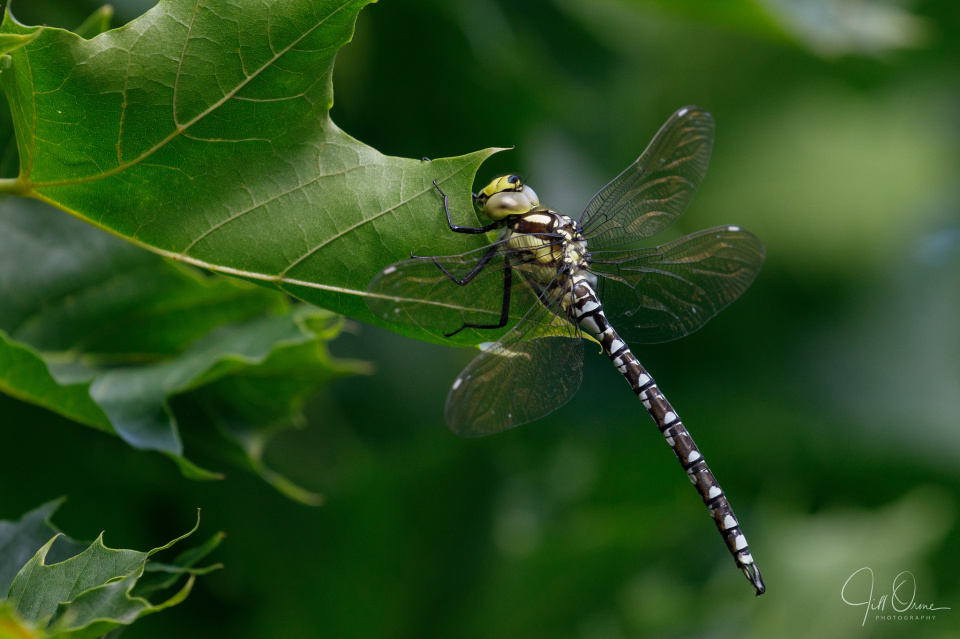 So it turns out that it’s not as easy as one might assume to stand on the top of a stepladder on uneven ground, point a large camera and a long lens at an insect in a tree that’s blowing around in a gusty breeze, and achieve well-focused images. Who’d have guessed? In the circumstances I’m not completely unhappy with this.

This is the second male Southern Hawker I photographed today; the first one was flying hunting loops in the top garden at lunchtime, and being fully mature and at the top of his flying game, he’s just a green and blue blur in a couple of record shots that no-one other than me and the County recorder will ever see.

This one turned up in the far garden late this afternoon, and presented less of a challenge: as you can see from his pale colouring he’s very fresh indeed, and he hasn’t fully mastered the move from water to air, so he had to perch and rest very frequently. The only issue was that he tended to land a couple of metres above my head, which is why, after taking numerous photos from down on terra firma, I positioned the cameras on the grass to act as markers, and scuttled back to the house – where R reacted to the sight of me trotting past him with a step ladder and throwing out the explanation “Southern Hawker in one of the sycamores!” as though this was entirely normal behaviour.

I photographed my new friend from numerous angles, and he stayed remarkably calm through the whole silly performance of me moving the ladder around and getting on and off it – the only time he moved, he flew just one short loop and then resettled in almost the same spot from which he’d taken off. In fact he was so passive that I wondered about going in closer with the macro, but decided that this might be pushing my luck. Southern Hawker males are quite territorial, and if he adopts our garden I can look forward to seeing him many more times over the next couple of months; but if he decides that he’s under threat here, there are plenty of other similar gardens along this lane where he could set up home instead.