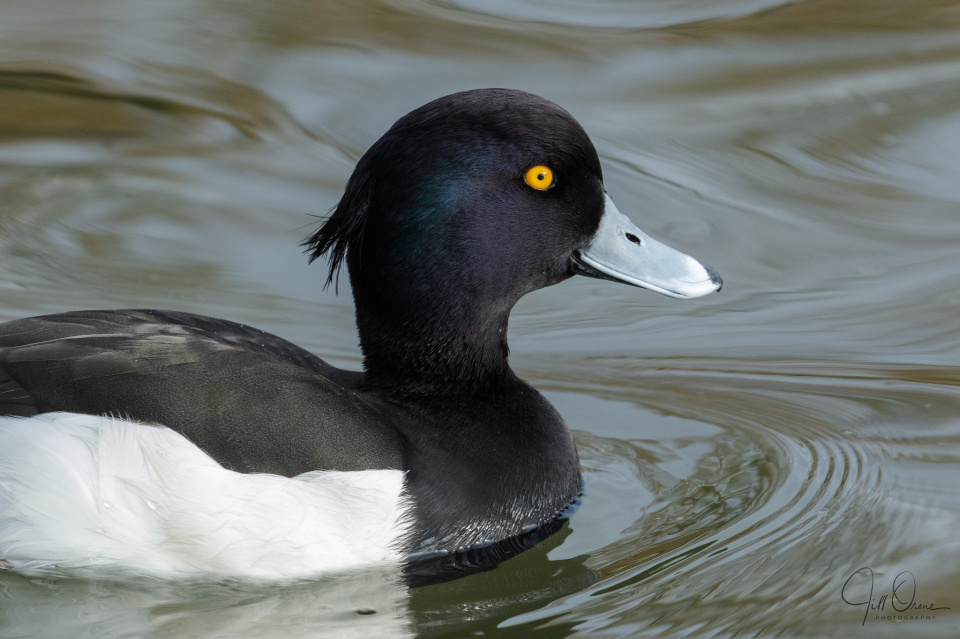 Today’s Stratford-upon-Avon tufted duck count: 4. Which isn’t as high as I’d like, but double the number there were a couple of days ago. The Thursday boys are continuing their bromance, sticking close together and clearly acting as each other’s security blanket, but they’ve been joined by another two males with a slightly more insouciant attitude to life – of which this is one.

When R and I arrived at the river the light was poor, but by ruthlessly ignoring my waiting husband, and continuing to follow the ducks up and down the quay in the quest for a half-decent photo, I managed to wait out the cloud, and caught this handsome guy in a shaft of sunlight that nicely lit his cheek plumage. This, of course, made me happy; but so did the fact that a young woman who was on the quay with her family at the time called out and asked me what the pretty black and white ducks were. These days this seems to happen to me quite regularly, and although I’m generally more comfortable talking to ducks than humans, it gives me a lot of satisfaction to know that normal people are also taken with the tufties, and want to know more about them.

Tonight we watched this week’s Lockdown Family Film Club choice: What Happened Miss Simone. This was proposed, as you might expect, by the family jazz musician, but it’s not a “muso” film and R and I found it pretty gripping – though it was difficult to watch archive footage showing Simone struggling with her mental health, and to hear her daughter talking about the monster her mother turned into during her slide into bipolar disorder. Viewed through any lens Nina Simone’s life was extraordinary, but I found myself wondering how differently things might have turned out for her if her marriage had been supportive rather than abusive. The film hasn’t been especially well reviewed, but I do recommend it as a fairly straightforward biography of a talented but damaged woman. There’s quite an interesting piece here by Dorian Lynskey (who I’d only previously run across as a political commentator); and he’s also made some personal recommendations here of albums to check out from Simone’s huge discography.