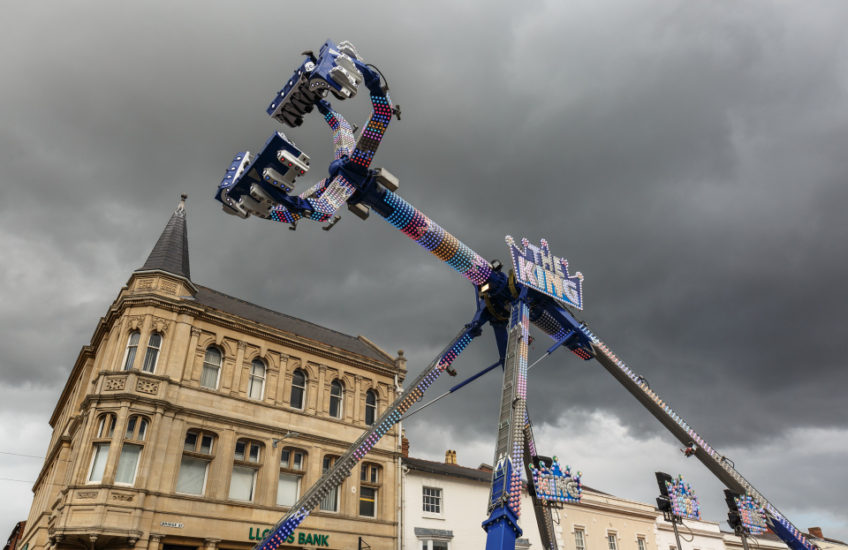 I had to run a few errands this afternoon, and knowing that the Mop was in town I decided to do them in Stratford, in the hope of also finding some blipportunities to exploit.

Mop fairs were originally hiring fairs, and were held annually on Michaelmas Day in market towns across the English Midlands. Farm servants and labourers were generally employed on an annual basis, and the fairs allowed those who were looking for work to mingle with potential employers, discuss their skills and experience, and strike deals. Wherever you have a large aggregation of people, of course you also get others looking to make money by selling those people food and drink, or by entertaining them; and because the hiring fairs took place after the hard slog of harvesting and before the deprivations of winter, and when they had cash in hand after being paid off by their previous employers, the workers were inclined to let their hair down and have as much fun as possible – so the Mops had a reputation for rowdiness and disorder.

I’m not sure why they came to be called Mop fairs – Wikipedia states alternatively that the emblems worn by workers to denote their skills were referred to as mops (which may be true), and that housemaids looking for work would carry their mops as emblems (which is highly unlikely, I would have thought: firstly because the mops would surely belong to the employers rather than the maids, and secondly because I can’t imagine a young woman out on the razz at a fair wanting to lug a mop round with her all day – unless it was for fending off unwelcome advances from men). Anyway, whatever the etymology, they were and are called Mops in this part of the world, and they still take place in some of the towns which traditionally held hiring fairs, around the second week of October. In the bigger centres such as Warwick and Stratford there is a second, smaller fair called the Runaway Mop a week after the main event; the origin of which is that workers who were hired at the main fair were taken on for a trial period of a week, and if for some reason that arrangement didn’t work out they could put themselves back out for hire at the second fair.

Stratford closes three of its main roads to traffic for the two days of the main Mop: Bridge Street, High Street and Wood Street are all filled with stalls and rides, loud music and a noisome smell of frying burgers. This afternoon there weren’t very many paying customers about, and most of the stall holders and ride owners were standing around chatting to each other, but this huge contraption was in operation – even though there was only one man riding it when I took my photos. If you look full-screen you should be able to see his flailing feet. My alternative title for this blip would have been Rather Him Than Me.

I’ve put a few more photos here, and there’s a page on the history of Warwick Mop here.