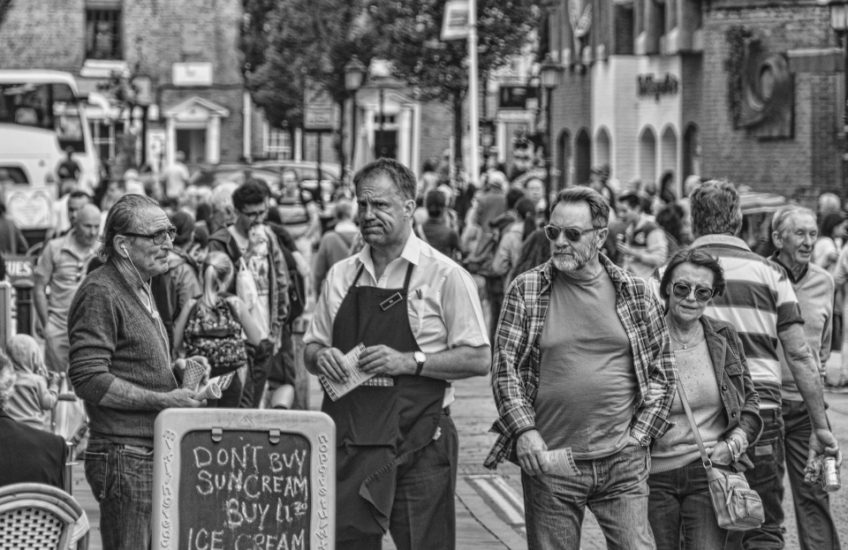 After two days of warm sunny weather, today was overcast and humid, with occasional half-hearted rain showers. I heard myself tell R on the phone that the weather was snivelling, and while part of my brain was trying to unpick the malapropism, another part was deciding to stick with snivelling because it was a pretty apt description.

But I was not downcast, having skipped out of the dreaded rheumatology appointment with a gold star and a smiley-face badge for being the only patient of the morning to know the correct answer to the question “How are you?” – so, after a celebratory raspberry and white chocolate muffin, I marched off through Stratford in search of the meaning of summer.

I came home with photos of:
Tourists;
Hollyhocks;
More tourists;
Local workers grumpily picking their way through crowds of tourists;
Tourists queueing to get into Hall’s Croft;
Youth, released from incarceration in its place of education, indulging in water-based boredom-deflection activity (truly, I have never seen worse rowing in my life – I wouldn’t have let them out on a boating pond, let alone a river);
Tourists filing back to their buses to proceed to their next blipportunity.

But of the shots I’ve kept, this is the one that amused R the most – I hope you like it too.

Before I forget: we were talking of Waterloo about a month ago, and shortly afterwards I happened across a list, in either the Guardian Review or the Observer, of recommended novels set around the Battle. As I’ve read a number of factual accounts over the years I thought it might be interesting to read some fictional ones too – so I downloaded a couple onto my kindle. I’m currently about 3/4 of the way through An Infamous Army by Georgette Heyer – and if you’re thinking “But isn’t that the Regency romance woman?”, you’re right: it is. But the military detail in this novel (which does also have its fair share of sprigged muslin and heaving bosoms) is precise and accurate, and her description of the Battle itself is absolutely gripping. One review I read stated that it was on the required reading list for a course at Sandhurst, and that wouldn’t surprise me – it gives a better sense of the order of events and of Wellington’s personal role in the Battle than some histories I’ve read. Highly recommended.

And finally – today’s Happy Driving Music from my iPod: BRUCE!!!