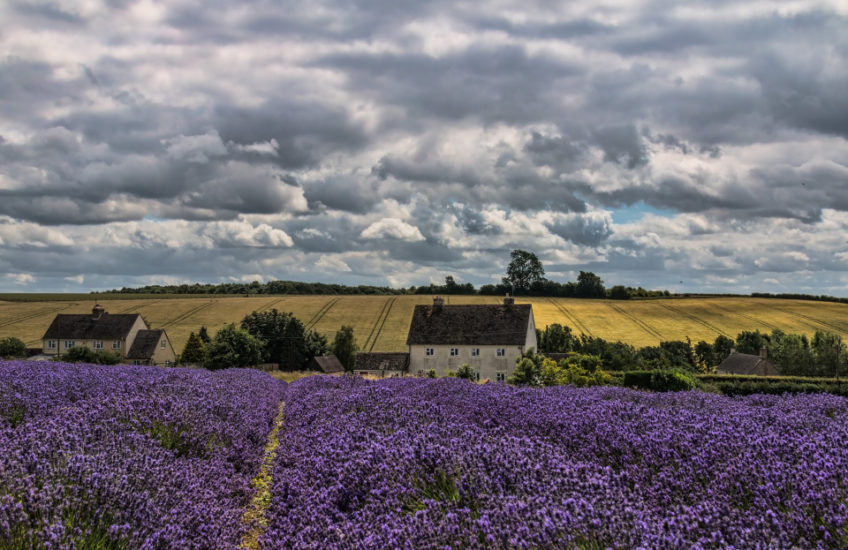 It was warm and sunny in our little valley this morning, but I had to go to Stow-on-the-Wold and when I reached the top of the Cotswold Edge I was surprised to discover that autumn had apparently arrived – it was dark, windy and definitely snivelling. I thought I’d have to put my plan to visit the lavender farm at Snowshill on hold, but by the time I left Stow the weather seemed to be clearing so I decided to risk it. It turned out to be a good decision because they’re planning to start harvesting on Friday.

I spent about an hour wandering around the farm taking photos, though the light wasn’t great for photography – some of the time it was very overcast, but when the sun was out it was strong, and there was scudding low cloud creating shifting shadows. It was also far too windy for macro work, so even though I had the right equipment with me to take a Tiny Tuesday shot I had to abandon that project in favour of taking more general scenes. I thought that at least I could produce something to remind you all that tomorrow is Wide-angle Wednesday – the theme is Landscape (encompassing Waterscape if that suits you better).

When I first arrived the farm was reasonably quiet and it was possible to get photos that excluded people, but shortly after I took the shot I’ve featured here a coach party turned up. From then on the place was swarming, and after a while I found myself photographing the visitors rather than the lavender.

I shudder at the thought that I might be turning into some kind of female version of Victor Meldrew, but I have to admit that there are some aspects of the Zeitgeist with which I’m completely out of tune, and the selfie is one of them. In the extra four photos were being taken (the woman in orange fourth from left had some kind of device too, though you can’t see it), and there was also another couple a few yards away taking one via a selfie stick – but the lavender field was nothing more than a backdrop in any of them. I’m not saying that this is worse than what I do, just that it bemuses me – I suppose if I were young and lovely like the two young women on the right I might just feel that my presence in a photograph would improve it, but I have to stretch my imagination quite a long way even to arrive at that thought! 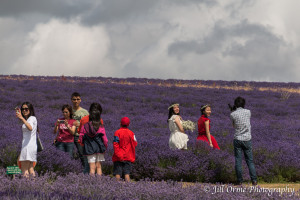 In the interest of balance I’ve included a second extra: after their friend had photographed them both, the two young women ran in and out of the lavender for a good ten minutes photographing each other and poring over the shots – but then later I noticed the woman in white photographing flowers, and despite the barn in the background I thought she looked rather lovely doing it. 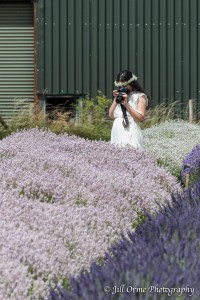 If you’re interested in the products they produce at this farm, the web site is here.