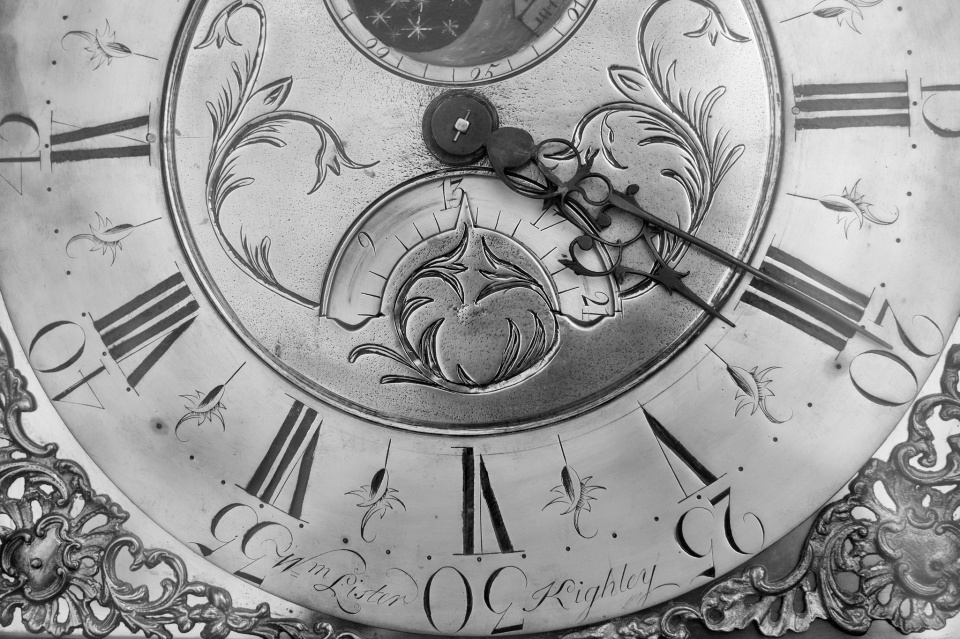 This isn’t the first time I’ve blipped this clock, nor even the first time I’ve blipped it for Mono Monday: but when I saw that Nickimags888 had set Origins as her theme for this week, the two ideas that came immediately to my mind were fossils, and family history. So I photographed some fossils and this heirloom, and this was the photo that R preferred. (I thought of giving you the fossils as an extra, but who knows when I might need them as a subject again!)

William Lister, the man who made this clock, was born in Keighley in the West Riding of Yorkshire in 1722. He came from a family of clockmakers – mostly just local tradesmen, making roughly-crafted time pieces for local cottagers and farmers, but his elder brother Thomas became quite renowned in the county, and Thomas’ son, known as Thomas Lister jr., made pieces that are now quite sought-after and valuable. The two Thomases moved away from Keighley and established themselves in the bigger town of Halifax, and a number of other members of their extended family followed them there – including William’s son Samuel, who was born in 1757 and was also a clockmaker. William Lister remained in Keighley for his entire life, producing at least nine children from two marriages, and died of a fever in 1793. He left his clockmaking tools to his son Samuel.

Samuel had no sons but several daughters, one of whom married a chancer from Cumberland with a natural bent for mathematics and a shrewd head for business; it’s possible that her father didn’t initially approve, because the two married some distance away in Hull, but by the time Samuel died his daughter and her husband were successful and wealthy people, and he chose his son-in-law to be the executor of his will. That family is fascinating in its own right: the vaguely-remembered oral history on which I was raised, of pioneering settlers in New Zealand, inventions, shipwrecks, a missionary dying of fever in the Tropics, and a Chancery case which essentially ruined the family, all turned out to be at least partly true – but I’ll save their story for another time.

I described this clock as an heirloom, but that’s only because I intend it to pass down the family after I’m gone – whether or not either of the Offspring actually wants it. It was being sold by an horologist in Pateley Bridge, North Yorkshire, about 12 years ago, just around the time when I firmly established that I am a 5xgreat-granddaughter of William Lister – I’m lucky not to descend from the Thomases, because one of their clocks would have been prohibitively expensive, but this was affordable, and with R’s amused blessing I drove up to Yorkshire and bought it.

I’ve only shown you part of the face here, but it’s a long-case clock in oak, with a typical flat-topped Yorkshire hood.  The mechanism (which has been described to me by a local horologist as “primitive”) is made of brass; the pendulum is made of iron, and the counterweight is a huge lump of pig iron. It is highly temperamental, and stops working at the least offence. Luckily R has a degree in engineering, and over the years he has developed an understanding of its quirks and foibles which allows him to keep it running most of the time – it’s only when something literally breaks within the mechanism that we need to seek expert help.

It’s not an elegant object, but it’s attractive in its own rustic and “primitive” way, and is still performing the function for which it was made, well over 200 years ago, in a little workshop in a small town in the depths of Yorkshire, by a man from whom I’m descended. And every time I wind it, I’m conscious that it represents an element of my origins.