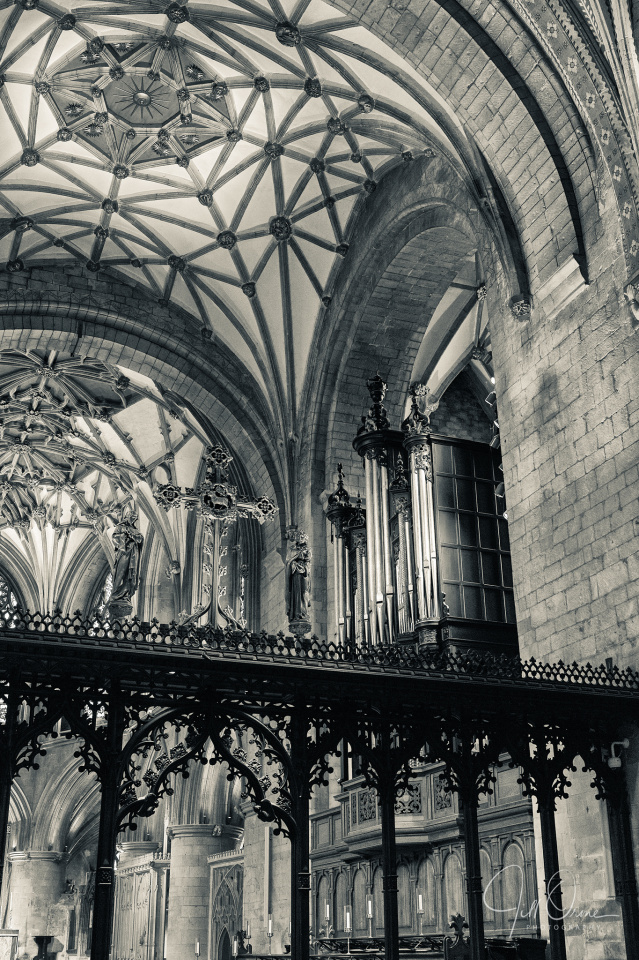 Tewkesbury Abbey has two pipe organs, of which the bigger and more photogenic lives in the choir (which it amuses them to spell Quire). Unfortunately, the Quire was closed today because something or other had been done to the tiled floor and they didn’t want it walked on, so this was the best view I managed to get of the Milton Organ.

It was originally built for Magdalen College, Oxford, in the year 1631, during the reign of Charles I. In 1654, during the Protectorate of Oliver Cromwell (following Charles’ untimely separation from his head), the organ was moved to Hampton Court Palace, which Cromwell had adopted as his main residence; he lived fairly high on the hog for a man who didn’t much like other people having fun, and was especially fond of music. There’s a legend that the poet John Milton used to play the organ at this time, which is how it got the name by which it’s now known; Milton (as well as being the author of interminable poems) was employed by the Republic as a propagandist and censor, but he was also a skilled musician and composer.

Following the restoration of the monarchy in 1660, the Milton Organ was promptly returned to Magdalen College, where it stayed for the next few decades. It was sold to Tewkesbury Abbey in 1736, and after wandering around the building for a while, eventually found a permanent resting place in the Quire. It has been enlarged and refurbished a number of times since coming to Tewkesbury, and was completely rebuilt in 1997, with a further refurbishment this year. The Abbey’s web site describes it as “a four-manual instrument with 68 speaking stops and 4611 pipes. The lower three keyboards have mechanical action, whilst the Solo and Apse divisions have electro-pneumatic action.”

There’s a short film about the organ, including a few seconds of it being played, here.

This is a 7-shot stitched panorama of the Nave and Quire:

…. and this is a 3-shot stitched panorama facing in the opposite direction: 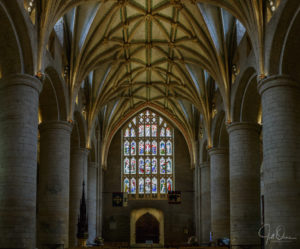