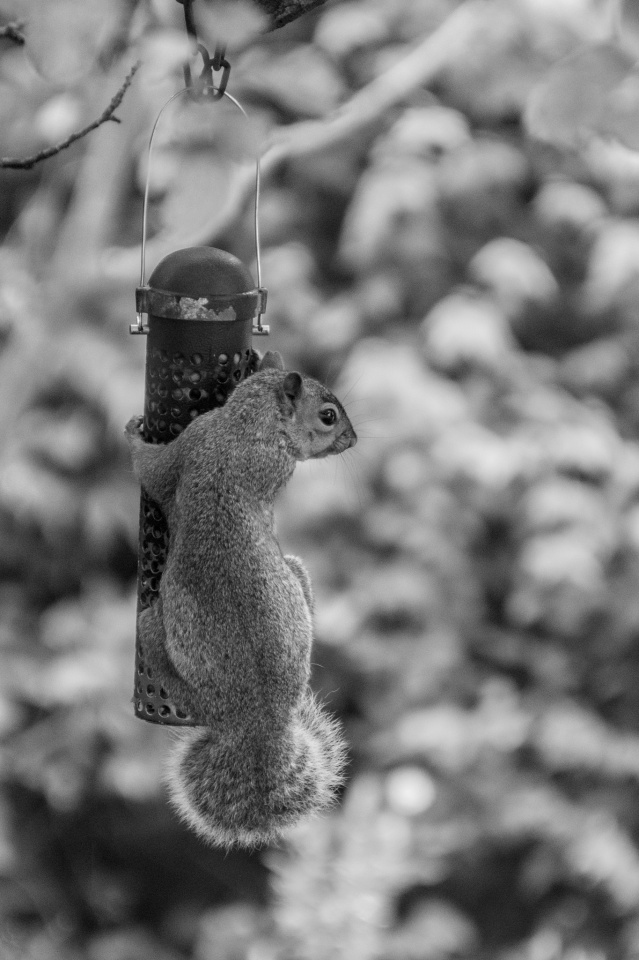 Some of the squirrels that live in our garden are pretty bold, but as soon as I spotted this one this morning I could see that it was nervous:  it stopped eating every few seconds to check around for danger. It has a little nick taken out of its left ear tip – which suggests to me that it has probably come second in a fight with one of the others at some point, and I would guess that it was expecting to be turfed off the peanut feeder at any moment.

I’m in a happier mood than Nick today, because I’m enjoying some new additions to my editing software. Last week I attended a Topaz Labs webinar, following which all participants received a 25% discount voucher; and after looking at a number of reviews I bought two more of their plug-ins – Clarity and Detail – to add to the three I already had. I’ve experimented with both over the last few days, and I’m very pleased with them.

I started this shot off in Lightroom, tweaking the exposure and adding a lens correction. Then I took it into PSE and created a duplicate layer, which I edited very quickly with one of the presets in Topaz Clarity. Having checked the edit back in PSE I flattened the image and brought it back into Lightroom for a final contrast tweak. It sounds involved, but it only took a few minutes – and all the other images from the set were even quicker, because Clarity remembers the settings you last used. The PSE stage isn’t actually necessary, but it stops Lightroom stripping out the EXIF data, and it also gives me the opportunity to see if I think I’ve overdone the edit – in which case I can blend in the adjustment at less than 100%.

Because I had a few minutes to spare I did three different edits on the first shot in the sequence – one via this method, one simply using Lightroom, and one via Topaz B&W – and the Clarity edit was by far the most pleasing to my eye. It gives very fine control over contrast and detail, and produces a more subtle image.