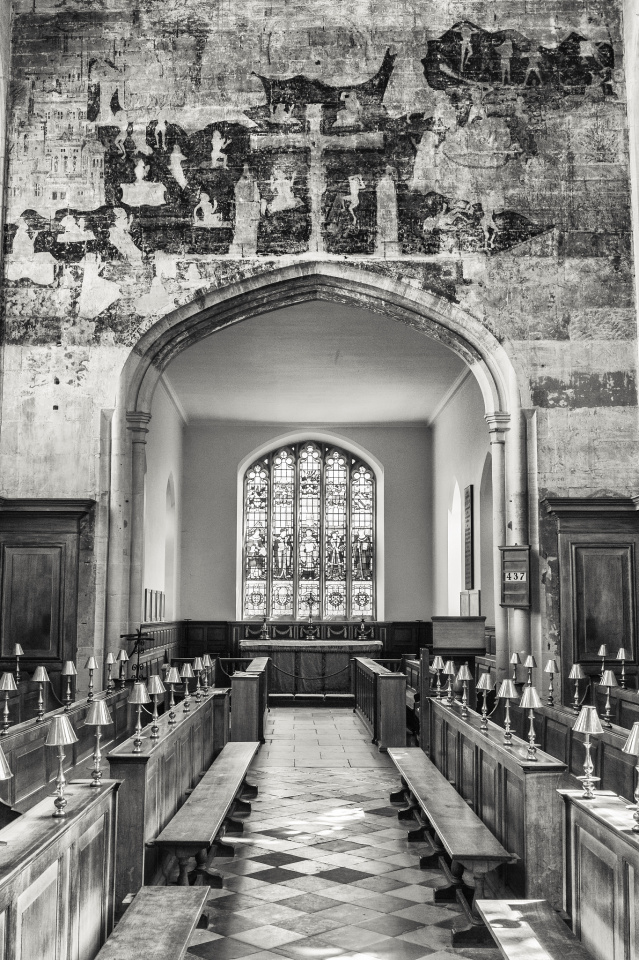 My mind turned today to Shakespeare, surely one of the greatest communicators in history, whose works have been performed in more places around the globe and translated into more languages than anyone else’s; and whose fame brings thousands of tourists a year to a small market town in the heart of England. It’s now possible to go into the historic Guildhall in Stratford-upon-Avon, and above it the old school rooms where Shakespeare was almost certainly educated (though precise records for this time have not survived), and finding myself on Church Street at lunch time today I thought I should take a look at them.

It’s not the cheapest of outings, though you can reduce the cost by booking on line in advance, but in the end I didn’t feel short-changed. The rooms themselves are extraordinary, giving you the feeling of walking through history, and there are interactive displays and knowledgeable guides in all the rooms. I had especially informative conversations with one of the volunteers downstairs in the Guildhall, and with a man dressed as an Elizabethan school master upstairs in the School Room and the Master’s Room.

For those who say that the Complete Works surely can’t have been written by a country lad from Warwickshire, I have two words of response: intellectual snobbery. A grammar school education in the C16th involved working from 6am (7am in the winter) to 5pm, with a couple of hours off for lunch – and primarily in Latin, although some Greek was also taught. Pupils sat on wooden forms in a large room, segregated by age, and learned largely by rote, though they did have wax tablets to write on with styli. As well as learning to speak and read in Latin (the passport to further study which would allow them to enter the Church or become doctors or lawyers – and thus be, ideally, at least as successful as their parents), they studied the tenets of the Protestant faith, English history, great works of Classical literature, logic and rhetoric. It was an education that most of us today would struggle to cope with.

As well as his formal education, Shakespeare would have learned the folk tales of the area, which were commonly told and retold as entertainment within the home, and would have seen plays and masques performed in the town by both amateur and professional players. There are records of several visits to Stratford by professional acting troupes during his youth, and it’s tempting to imagine young Will being bitten by the acting bug at a performance in the Guildhall.

I’ve put in a photo of the area of the school room where the older boys were taught in Shakespeare’s day (and which is still used by King Edward VI School as a classroom today, and still known by the pupils as ‘Big School’) as the first extra. 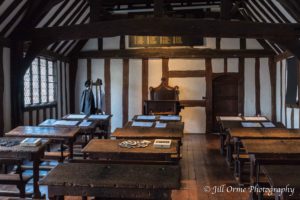 My main photo, simply because I like it more, is of the interior of Guild Chapel, next door to the Guildhall. This was originally the chapel of the Guild of the Holy Cross, which in mediaeval times was an extremely important organisation in the town: as well as employing a priest to pray for the souls of its members, it founded the grammar school, paid for alms houses, and held civic feasts. After Henry VIII’s Protestant Reformation it was suppressed and its work was taken over by the Town Council of Stratford, but it seems that essentially this involved the same people exercising the same rights and performing the same duties as previously, though now within a secular rather than a religious framework. The Guild Chapel was covered with vivid mediaeval wall paintings depicting scenes from the Bible, as well as legends such as the story of St George and the Dragon and the murder of St Thomas a’Beckett – which were, of course, a form of communication, telling these stories in a dramatic visual way to those who couldn’t read. The paintings survived intact during Henry’s time, avoided defacement during the zealous but short-lived Protestant regime of his son Edward VI, and were once again in fashion during the Catholic reign of Edward’s sister Mary I; but once the Protestant Elizabeth I came to the throne their days were numbered. A few months before William Shakespeare’s birth the town accounts show that his father John Shakespeare, who at that time was Town Chamberlain, hired workmen to deface the murals and overpaint them with lime wash.

It’s said that the overpainting was at best cursory, and that the images could still be clearly seen by the many people in the area sympathetic to the Old Religion; but the Guild Chapel itself became redundant after this time, and eventually it fell into disrepair. It was restored in the C19th, at which point most of the murals were uncovered in a good state – but the work of Victorian craftsman achieved what Elizabethan religious reformers hadn’t managed to do, and effectively destroyed them. I’ve done everything reasonably possible to bring out the image known as ‘Doom’ within this photo – you’d see little more than this if I’d posted the shot in colour, or indeed if you were standing in the Chapel yourself. But my second extra gives you an idea of how lovely the paintings might have been – it’s a little image of St John which was discovered in the Guildhall during the recent restoration work there, and which is currently almost hidden behind a display screen. One of the guides showed it to me, and let me photograph it provided I didn’t use flash; it was very distorted by the fact that I was viewing it almost side-on, so I’ve partially corrected for that, as well as for the sky-high ISO I had to use – but I still find it charming. 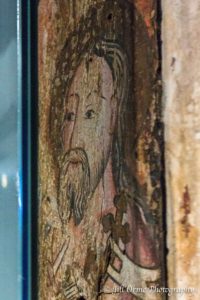 There are plans for restoration work to begin in the Guild Chapel later this year, to conserve the paintings and allow more of them to be displayed. There’s more on this here, and a visualisation of ‘Doom’ here.

There’s more on the Guildhall and School Room here.

If you’re interested in the current state of historical evidence about Shakespeare’s life, this is a good place to start.