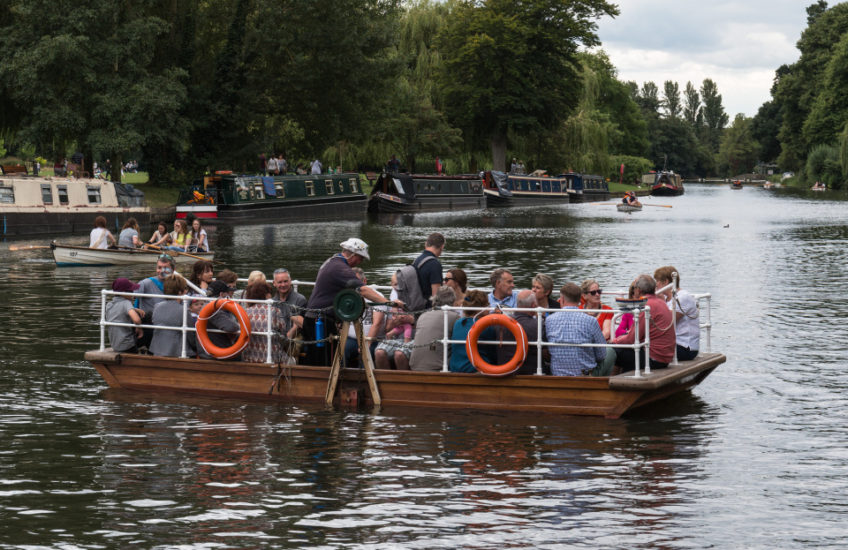 I mentioned the Stratford Chain Ferry the other day, but blipped Chesterton Windmill instead. Today I was in Stratford for errands and coffee with a husband who appeared to have gained two inches in height and lost about five years off his age overnight; and apart from a stream of souped-up Mark 1 VW Golfs going through the town in a noisy and apparently endless convoy, and an extremely gorgeous deerhound lurcher which I met outside Lakeland, there wasn’t much happening – so I snapped the ferry again as we were walking back to Old Town, and decided when I processed my photos that I like the shot enough to feature it today. I’ll add Fife the lurcher to my Dogophile album.

The Chain Ferry (named after a Shakespearian character because… well – because; I believe it might actually be mandated by law around these parts), was built in 1937 and restored in 2010. It’s manually operated, and was the last of its type to be built in this country. It only takes a couple of minutes for it to cross the river, which isn’t very wide at this point, and a single journey costs 50p. I’ve never personally used it, because it’s only a ten minute walk in either direction to the nearest bridges and I generally have cake to walk off, but it seems to be very popular with tourists.

Being popular with tourists is regarded as a Very Good Thing in Stratford-upon-Avon, as the ongoing row over the Stratford Wheel amply demonstrates, but at least the ferry is useful, quiet and as far as I know causes no environmental damage. Unlike the Wheel, I’m feeling a sudden urge to rush out and support it.

I spent much of this afternoon going boss-eyed over my interior shots of Selsley All Saints, some of which wound up being beaten senseless in virtually every processing program I own. I need to set a little time aside to learn luminosity masking, which I think would give me better results with the more difficult ones – but for now they’re done, and I’ve posted an album here if the Pre-Raphaelite Brotherhood is your bag.