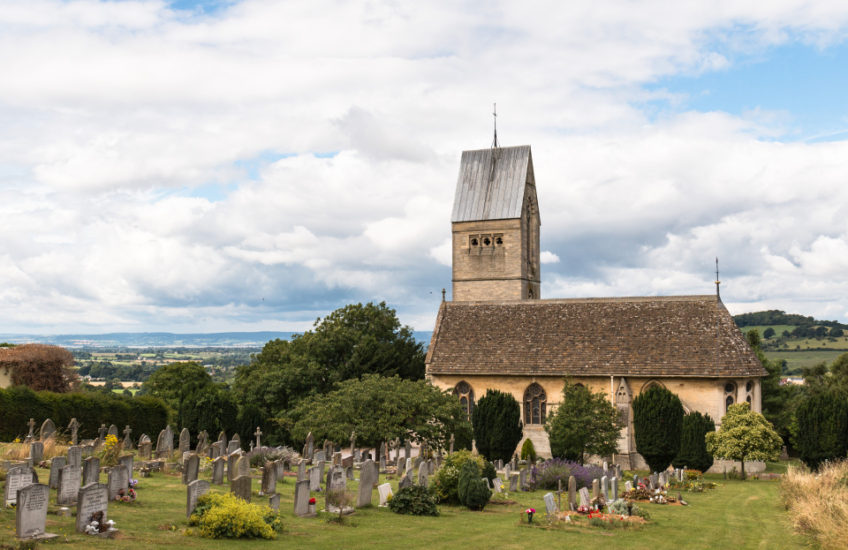 I was sitting at my desk yesterday, watching a sharp shower blow through the village and wondering what to do with myself, and I picked up Simon Jenkins’ book England’s Thousand Best Churches (which was still to hand from my researches into Wootton Wawen St Peter on Wednesday) and began to leaf idly through it. I looked up the churches of Gloucestershire to see whether Chipping Campden St James is listed – which of course it is – and was arrested by the following line in the county introduction:

“By the 17th century, Gloucestershire’s age of splendour was over. But the county was fortunate in its 19th century benefactors. They contributed…. G. F. Bodley’s Selsley, … recently restored as a gallery of early Morris glass.”

My Arts & Crafts antennae twitching, I turned to the entry for Selsley All Saints, which begins:

“The church has a magnificent location on a ridge overlooking the approach to Stroud. Selsley is the product not of parochial history but of Victorian munificence, that of Sir Samuel Marling, merchant of Stroud. He is said to have demanded a design modelled on a church at Marling in the Austrian Tyrol. His architect in 1862, the young G. F. Bodley, erected a work in French (rather than Austrian) Gothic style, rugged and powerful with a saddleback tower, Plate tracery, apsidal chancel and steeply pitched roofs. In winter, Selsley might be on a limb of the Alps. The exterior is austere, the interior no less so.”

It goes on to explain that a commission from Bodley to provide glass for the church was instrumental in the foundation of a partnership between William Morris, Edward Burne-Jones, Ford Madox Brown, Dante Gabriel Rossetti and Philip Webb, and that all the partners contributed to the design of the windows.

Well, of course, it needed to be visited.

Back in the days of the diesel Golf I would probably have contemplated this, logged it as a place to which to drag R at some future date, and then stepped around the thought and moved on with my relatively circumscribed life. But now I have roadster and will travel – so today the MX-5 and I zoomed down the M5 to South Gloucestershire, and parked ourselves on the vertiginous ridge which houses Selsley All Saints. About which I only have one negative comment to make, and that’s that there were no lights on in the interior (reasonably, given that it’s not exactly on the main tourist drag), and I was too diffident to attack the switches myself – which made photographing the interior slightly tricky. I have a good set of photos, but they’ll take more than the usual LR editing – so I’ll tackle them tomorrow and then post an album on my Facebook page.

For now, please accept this one of the exterior, and a single extra of the west end of the church with its rose window. An information sheet in the church states that the overall design of the rose window is credited to Burne-Jones; the central roundel (“In the Beginning”) was designed by Morris, and the outer roundels (clockwise from the top) are by Webb (“Holy Spirit”); Burne-Jones/Morris (the next two – “Light and Darkness” and “The Waters”); Morris (“Vegetation”); Burne-Jones/Morris (“Celestial Bodies”); Webb (“Birds and Fishes”); Morris (“Adam and Eve”); and Webb (“Adam Naming the Beasts”). The windows below the rose are attributed to a man called Campfield, who worked for the company. 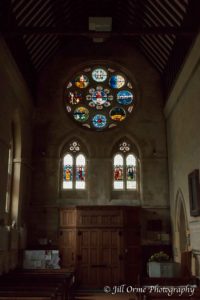 After a happy hour exploring this church and its surroundings I set off back towards home, but as I approached Gloucester Services on the M5 a violent desire for caffeine and cake took hold of me, so I pulled in. I’ve never stopped there before, though I’ve been intrigued in passing by the sign stating: “FARMERS’ MARKET” – not the usual fare at a British motorway service station – and I have to say, it is definitely different to the norm. It has a grass roof for one thing, and distinctly superior catering. It also had, today at least, an almost overwhelming miasma of pig slurry. Avoiding the slurry-coloured soup, I troughed through a latte and a piece of coffee and walnut cake, and took off again at speed.

I then had a sudden whim to revisit Chedworth Roman Villa, which R and I last went to with the Offspring about fifteen years ago. And I’m glad I did – it’s a terrific site, which is being developed as an ongoing project by the National Trust as archaeology and money permit. I had that time-slip experience again that I sometimes have in historic places, which makes me catch my breath and get all silly and emotional, though I always manage to do it quietly and not make a spectacle of myself. I will go back soon and blog Chedworth then – but for now, please allow me to give you a word of advice: DO NOT take the quickest satnav route to it from J11A of the M5, unless you’re driving a 4×4. I do still have my suspension, and I believe the MX-5 does too, but I haven’t been that scared since R had to drive a hire car over a mountain pass in Fuerteventura in thick fog, with my two and only children in the back.

I’m nearly done here, but speaking of R I just want to record that today is the day my remarkable husband sold a company, making no money but preserving twenty six people’s jobs. I believe that his forebears would be proud of him – I certainly am. Three months from now he will be seriously underemployed, unless I can find something for him to do (like driving me to Chedworth in a sensible car, possibly….?). This evening some celebratory Aperol spritz has been drunk by self and spouse – and given that this is one of the most efficient alcohol-delivery devices known to man, I suspect that I should probably apologise for my spelling and grammar.