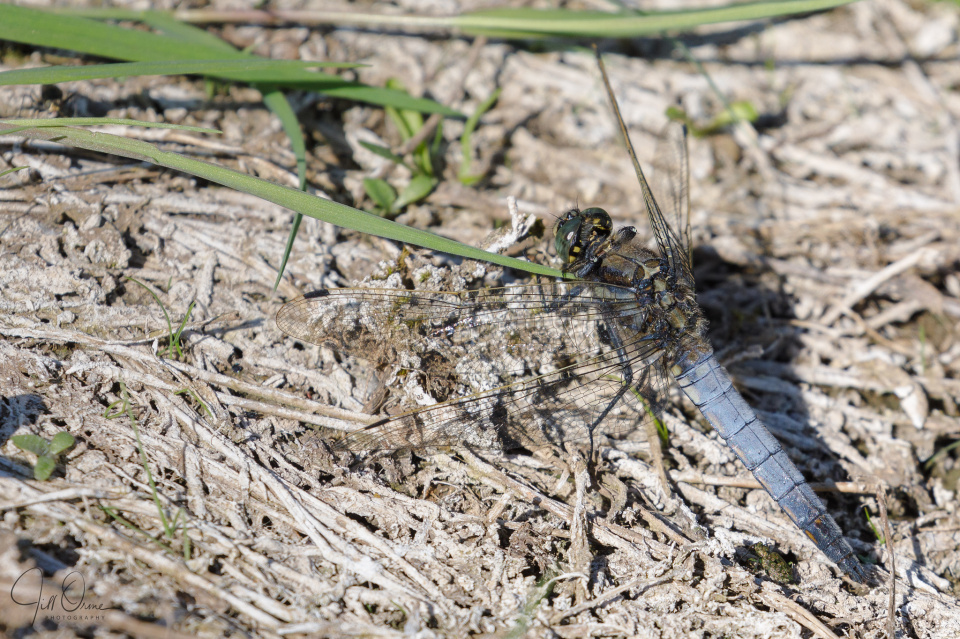 Relatively speaking, that is.

I photographed this Black-tailed Skimmer at Coombe Hill nature reserve in Gloucestershire this afternoon, and it was only when I processed the photos that I spotted the tiny chap sitting next to him; the Skimmer is about 5cm long (2 inches in old money), and the beetle round about a tenth of that length – so you may have to view this full-screen in order to see it. I was very intrigued as to what it could be, so I posted the photo to the insect group on Facebook this evening, and generated an appropriately small flurry of interest. Apparently it’s a ground beetle, and most probably one called Elaphrus riparius, which, according to John Walters’ Guide to British Beetles, glories in the common name of the Green-socks Peacock Beetle. I think it’s charming, and I hope the Skimmer didn’t notice it, because if he did it was probably toast.

On the subject of predators, if you are viewing the Skimmer and his tiny companion full-screen, and you’re not arachnophobic, you might like to take a look at today’s extra as well. On my way to Coombe Hill I swung round via Kemerton Lake to see if there was anything interesting going on there, and as I walked along the crop field to get to the lake I spotted a tiny crab spider resting in a poppy, and waiting for unwary nectar-seekers with gently smiling jaws. These crab spiders are capable of changing colour, within reason, to camouflage themselves against their surroundings, but they most readily turn yellow; if this one is going to try to become crimson, I think she’ll need to put in some serious work.

Other highlights of the day included seeing my first Beautiful Demoiselle of the year at Kemerton, and my first Emperors at Coombe Hill. Fresh male Emperors are very hard to photograph because they’re almost indefatigable, patrolling fast and continuously, and never seeming to settle – which meant that I got my first in-flight dragon photography practice of the season. I wasn’t thrilled with the results, but after a nine-month lay-off I was bound to be rusty. I hope to be doing better by the end of the summer.