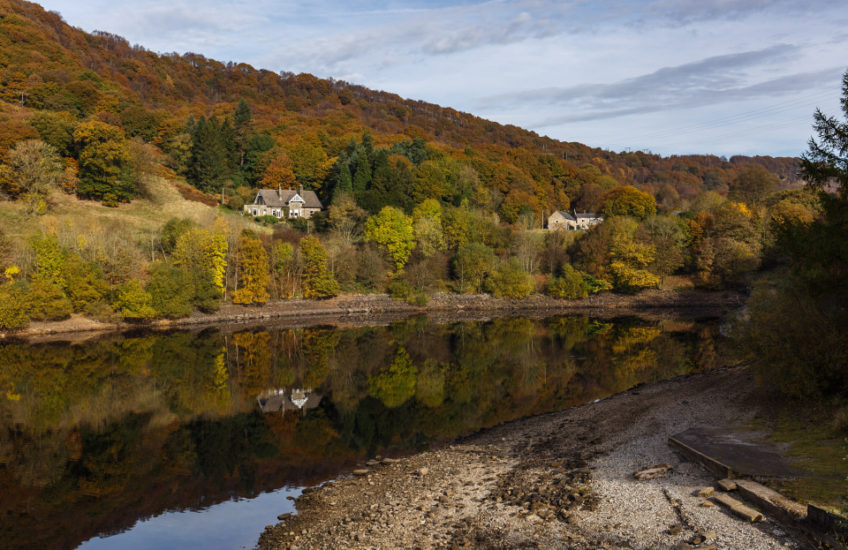 R and I drove up to Derbyshire today to have lunch with his aunt and uncle, B and J. We set off early in the hope that I would be able to get some landscape shots, and though Worcestershire was pretty foggy, by the time we reached Derbyshire it was a beautiful day – and extremely warm for the last day in October.

We’d only just gone through Owler Bar, heading towards Hathersage, when I had my first “Oh, WOW!” moment of the day: some distance in front of us was a valley that looked like a bowl full of mist. I’ve seen photos of this phenomenon before, which happens as a result of a temperature inversion – that is when the air gets warmer rather than colder the higher up you go, trapping a layer of mist at lower levels – but it’s the first time I’ve ever seen it in person. R managed to pull into a lay-by so I could take a few photos; then we carried on to The Surprise, which is a spectacular view across the Hope Valley, where the A6187 takes a sudden turn before running down into Hathersage – it’s a bit less of a surprise when you’re expecting it, obviously, and the name probably over-sells it, but it’s always worth seeing.

After a few minutes teetering vertiginously on The Surprise we drove down to the Ladybower Reservoir, which had some quite nice light on it and provided me with a third set of shots. This image was taken from the road bridge that crosses the southern end of the reservoir, where it turns into a trickle of water known as Ladybower Brook; in the distance towards the right of shot is the Ladybower Inn.

R has generations of family history in this area. On another day I’d like to go looking for the Packhorse Bridge which used to span the River Derwent, and at one end of which lay the family farm; although the farm itself, and the rest of the villages of Derwent and Ashopton are now ruined and submerged beneath the reservoir, the bridge was dismantled before the valley was flooded, and eventually rebuilt across the Derwent north of the Howden Reservoir. I’d also like to be here on a day when the huge “plugholes” which drain excess water out of Ladybower are running (the question in all our minds, surely, being “where to?”), but it’s been relatively dry recently, and today they were standing proud of the water level.

For today I was happy that I had my photos, and we went on to B and J’s house, where we were treated to a delicious lunch, and a long and leisurely chat. We thoroughly enjoyed our visit, and by the time we realised that we should be making tracks for home it was almost dark. It looked as though the last of the light would be very nice indeed down at Ladybower, but I decided that I’d be pushing my luck if I asked R to detour round that way again!

I’ve put some more images here, if you’d like to see more of this beautiful part of the country.