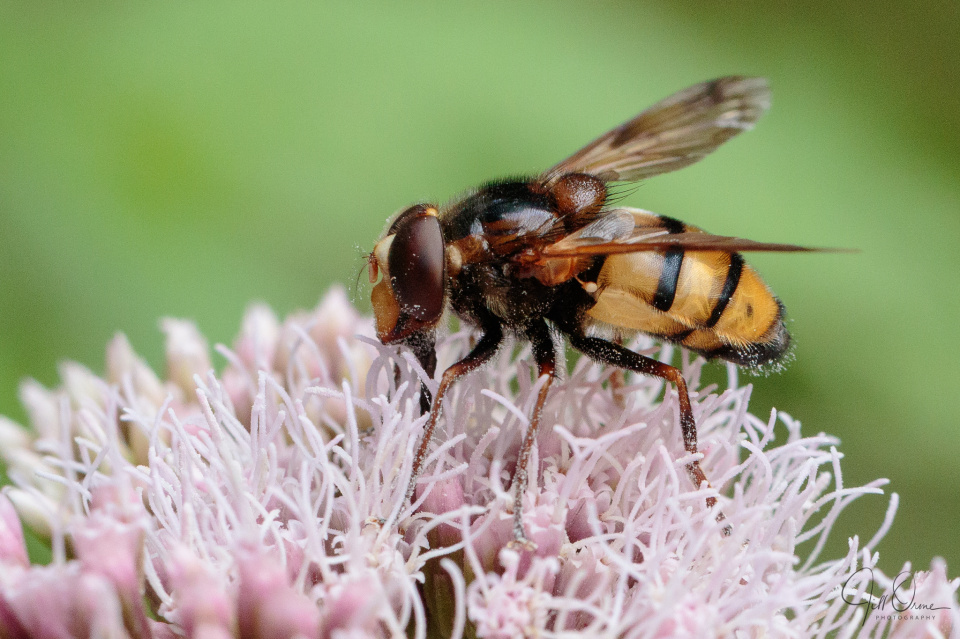 I had simultaneous wind rage and pond rage today, which isn’t a good combination: at one point my brain felt as though it was about to boil out of my ears.

After breakfast I took the net lent by our neighbour, baited it with a few bits of bread, and rested it carefully on the edge of the pond so that it was half-submerged. Then I fetched a chair, sat down where I could watch the net and grab it if necessary, and waited.

By lunch time I was getting a Bad Feeling about the whole enterprise. R also got a Bad Feeling every time he had to come down to the wild garden to talk to me about something, and the atmosphere turned stormy.

As if in sympathy, the atmosphere turned stormy, which is why, when I realised that there was a handsome male Lesser Hornet Hoverfly browsing the hemp agrimony, I had just about the worst imaginable time trying to take his photo, as the long slender stems were whipped back and forth at high speed. I found myself thinking bitterly that his Latin name, Volucella inanis, felt like a comment on the inadvisability of attempting macro photography under these conditions. I also found myself wanting to scream, but managed to hang on to the last shreds of my self-control.

By the time I’d rattled off 300 frames at this one subject, I was reasonably confident that something would be at least approximately in focus, so I went back to watching the pond. Then I fetched a book and read several chapters, while watching the pond. After a while I realised that I was actually quite cold, so I went back to the house for a while, and when I came back out and (pessimistically) checked the net, to my astonishment the fish was in it, lunching on soggy bread.

Twenty minutes later the fish was in the river, where I hope it has a wonderful time right up till it gets eaten by something bigger, and as soon as we arrived back home I started the tedious process of refilling the pond. By dinner time all the plants, diving beetles, water snails, and larvae (well, I only found one actual larva, but that doesn’t mean there weren’t smaller ones that I didn’t notice!) were back in their home, and the drained water and sludge had been carefully poured back in. It looks like soup again, of course, but it will clear over the next couple of days.

I’m now quite tired, but with the fish rehomed and a dozen of my 300 shots turning out to be – more or less – in focus, I can at least congratulate myself on a couple of outcomes that were better than had seemed likely earlier in the day. I just wish I could shake the nagging feeling I have that there might have been more than one fish in the pond……