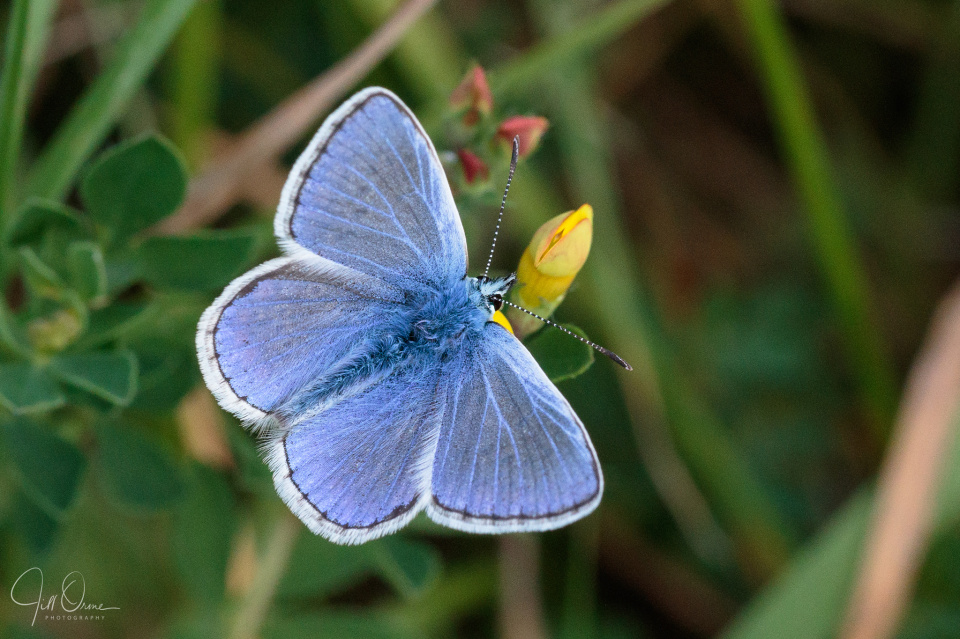 This was the best of my finds in Tilly’s field this afternoon: a lovely fresh male Common Blue, nectaring on what I think is bird’s foot trefoil. There were three or four around the meadow actually, but this was the only one that sat for me without having a fit of the vapours, in thanks for which he gets to have his photo posted to the internet.

I didn’t see any females during two slow, semi-crouching circuits of the meadow (I’m quite sure the village thinks I’m out of my mind by now), but they tend to be much more passive, quietly feeding or ovipositing without drawing attention to themselves. The males, on the other hand, are quite feisty and bossy except where cameras are concerned, bickering with much larger butterflies as well as with each other.

This evening at J&R Towers, loins are being girded and sinews stiffened: tomorrow all the plants are going to have to be removed from the wildlife pond, so that we can hunt down and trap the fish that’s currently living the high life in there, getting fat on a balanced diet of my pond plants and my Odonata larvae. We hadn’t seen it for several weeks, at which stage it was small enough to have fallen prey to one of the frogs – which is what we hoped had happened – but yesterday it reappeared, and in the interim it has clearly been doing whatever is the fish equivalent of shooting fish in a barrel among the other occupants of the pond. A neighbour of ours who’s a keen angler has tentatively identified it from a couple of photos I managed to get as a juvenile chub, which he says are voracious, so no matter how much I don’t want to disturb this carefully created little habitat, it’s going to have to be done.

It’s likely that I’ll be conversing with the fish in broad Anglo-Saxon while we play hide and seek, so you may wish to keep your doors and windows closed during the morning, if you’re of a delicate disposition. If you’re not, and you happen to be in the area, alcohol and/or cake would be appreciated.