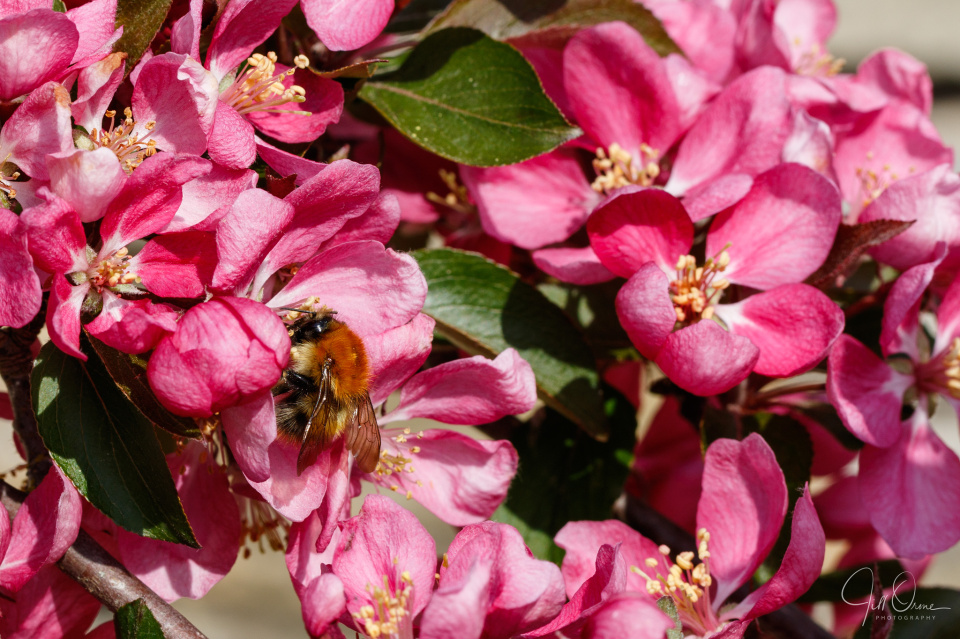 I am done – in more ways than one. All the gardening I set myself to do in advance of the family visiting us next weekend has been completed, though the effort required has brought me almost to my knees. Tomorrow I’ll be resting and regrouping, making lists and schedules, and possibly doing a little light shopping.

I was too busy to spend much time bug hunting today, but as you can see the crab apple in the yard is now in full glorious bloom, and it gifted me several nice bees, including this very handsome Common Carder. I have a number of favourite bees, but this species is definitely top of my bumblebee pops.

I’ve been wondering recently whether the term “bumblebee” is related etymologically to “Bombus”, which is the name of the genus to which all bumblebee species belong, and I’ve discovered that they both refer (as does the older common name “humblebee”) to the buzzing or humming noise these bees make when they fly. There are around 250 species of bumblebee world-wide, but only two dozen of them are currently resident in the UK. Of these, seven are very common and widespread, including Bombus pascuorum, the Common Carder Bee.

Common Carders have the longest flight period of any British bumblebee, with the possible exception of Buff-tailed Bumblebees, which are thought to nest right through the winter in warmer parts of the country. They appear in many different habitats, and aren’t fussy either about what they eat, or where they nest, though for preference they will use old rodent burrows within tussocks of grass. I’ve also noticed that they’re extremely industrious, working on days when the weather is poor and few other bees are on the wing.

Given the relatively large size of this female, I think she must be an overwintered queen: workers look superficially similar to the queens, but tend to be much smaller. The queens start to emerge in March, and each will seek out a site and establish a nest, which she supplies with pollen and nectar. Her first batch of eggs develop into workers, after which she remains in the nest, while they collect provisions to supply her and the young she continues to produce. Once the new queens and males are released, the old queen and her workers die, and the cycle begins again. Some sources describe this process as taking a full five months, but Falk states that B. pascuorum probably produces two generations each year in most areas of the UK.