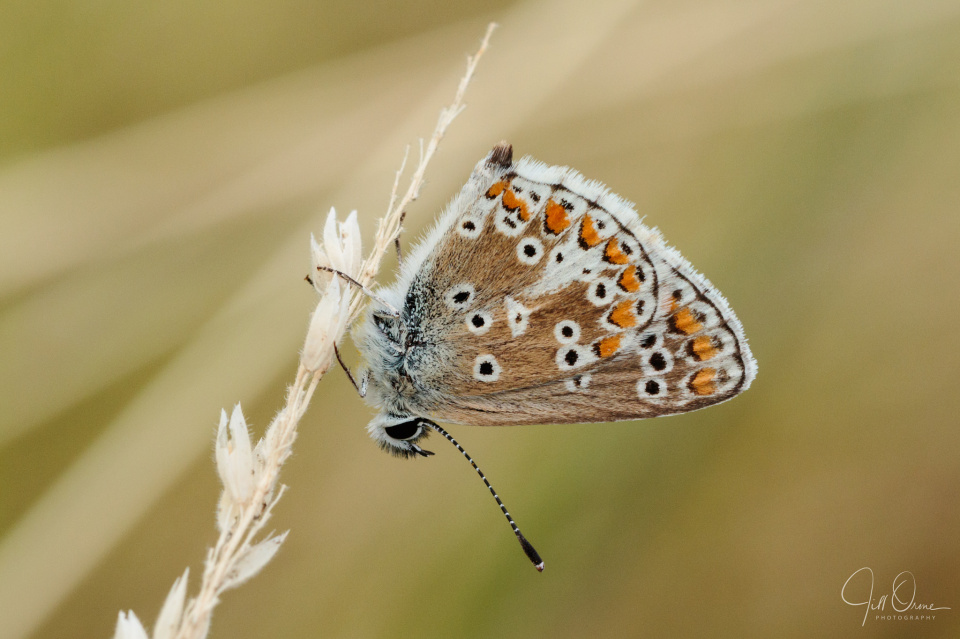 Q: When is a blue not quite blue?
A: When it’s a Brown Argus.

I went out intending to photograph grasshoppers this afternoon, but the grasshoppers had other ideas: I found plenty, but almost all of them managed to get out of the frame, and I wasn’t happy enough with the focus of the shots I did manage to take to want to post any of them. I don’t even slightly blame the grasshoppers though, because being herbivores they’re right at the bottom of the food chain, and have to assume that any larger creature that approaches them is probably a predator. In fact when I do get my sights on one I always feel slightly guilty, fantasising that the look on their faces is fear.

So instead I offer a companion shot to the one I posted on Monday, about which many of you were so kind and complimentary. Common Blue and Brown Argus butterflies are regarded as close relatives, though they’re classified in different genera, and having similar life cycles they’re often found together. I did a Facebook post a couple of months ago about the most obvious differences between the two species, so I won’t repeat myself here, other than to say that the “figure 8” mark on the hindwing makes this quite clearly a Brown Argus, whereas Monday’s Common Blue lacked that marking. If I had to guess the sex, I’d plump for this being a female, but that feeling is only based on the quite deep colouring of the underwing, and I certainly wouldn’t put money on it.

Having these little butterflies in the village, I was surprised on my last visit to Trench Wood by the number of photographers who were pursuing the new brood Brown Argus with determination and excitement; but when I checked their distribution I realised that we’re towards the northern limit of their range. If you draw a line across a map of England between Middlesbrough and Exeter, Brown Argus are common to the south and east of it, but rare to the north and west, apart from some colonies around the coasts of Wales, Devon and Cornwall – so folks from the northern part of the West Midlands probably do have to make special expeditions to see them.