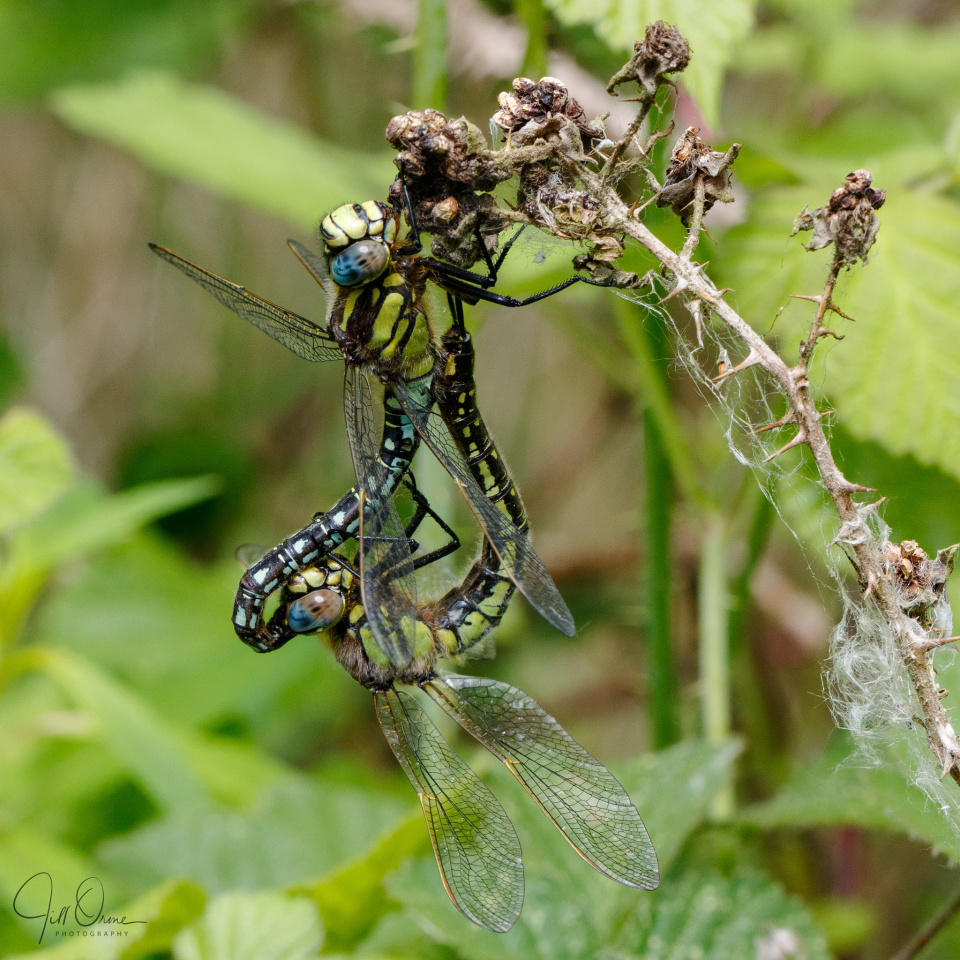 I zoomed down to the Cotswold Water Park this morning, hoping that the Downy Emeralds would be as cooperative today as they were on my last visit (sadly, they weren’t). Just after I arrived, I bumped into a couple of people I hadn’t met before, also there on a dragon hunt, and we exchanged pleasantries; they hadn’t known until then that there were Downy Emeralds at Lower Moor, so I walked them through the reserve to the glade where I photographed a pair of juveniles a couple of weeks ago.

The weather was quite changeable, with alternating periods of sun and cloud, and as dragonflies are surprisingly girly about flying when it’s overcast, there wasn’t much dragon activity going on – though plenty was happening in the damsel department, not all of it pleasant. After a while I got bored and went to check out some other areas of the reserve; when I got back to the woods, the chap I’d told about the Downy Emeralds immediately came over, told me that he’d been watching two dragons mating, and took me straight to the spot where they were still hanging in cop from a bramble.

The two of us spent several minutes peering at them and debating what they were, and I then spent another ten or fifteen minutes trying to get a really good photo of them. I don’t think that this image is ‘A’ panel material – in photographic terms there’s just too much wrong with it – but as a record of the species and the event I’m not unhappy with it. It’s fairly unusual to be so close to dragonflies when they’re mating, and given the unphotogenic perch the male chose, and the fairly unforgiving light, I don’t think I could have done much better.

It was only when I got home and looked at my photos on a big screen that I realised I’d been within a few inches of one of my target species: these are Hairy Dragonflies, which used to be considered rare, but which are now increasing in numbers, and spreading across southern England and central Ireland. They’re similar in appearance to Migrant Hawkers, but fly much earlier in the year, and for a shorter period of time. Males are territorial, and keep up regular patrols in bright weather – one flew past me at almost exactly this spot on my last visit – but the females are said to be secretive and are much less easily seen, so I feel especially lucky to have had this pair pointed out to me today.