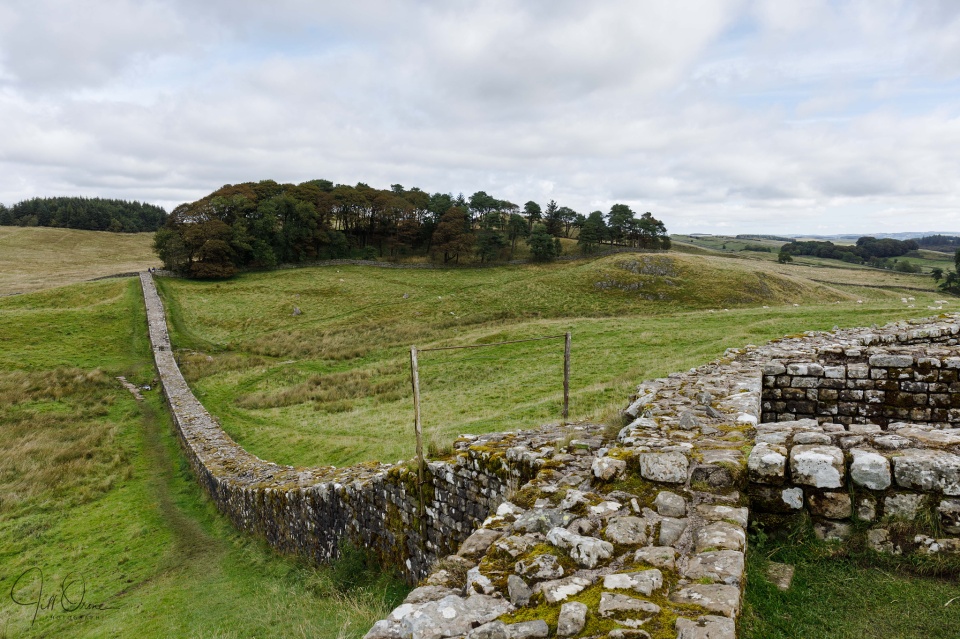 We spent most of the day ‘doing’ Hadrian’s Wall, which neither of us had ever seen before, and which we both found really interesting. We began the day at Housesteads, a joint National Trust/ English Heritage site with a superb stretch of wall and the remains of a military fort, all dating to the second century AD. The views across the surrounding countryside are spectacular, and the fact that you can walk along the top of one stretch of wall allows you to imagine yourself in the place of one of the Roman auxiliaries (mainly drawn from what are now Belgium, the Netherlands and France), who patrolled and defended this stretch of wall. In this photo the civilised Roman zone is to the right, and the Barbarian country to the left.

Even more interesting to me was the nearby site called Vindolanda, which is owned by a charitable trust. It lies a few miles south of Hadrian’s Wall and predates it, but was also an important Roman garrison, and stayed in use for several centuries after the Roman occupation of Britain came to an end. As well as the ruins of the fort there is an absolutely superb museum; the soil around the site is essentially a peat bog, and the anaerobic conditions have preserved items that became buried in the mud amazingly well. Even leather and textiles have survived, and the display of shoes – stated to be just a small proportion of the number that have been excavated here – gave me the shivery reaction I get only very occasionally, when it feels as though the veil between past and present is especially thin.

The mud also preserved what are known as the Vindolanda Tablets, which contain the earliest written evidence ever found of life in Britain, and although they’re regarded as one of the most important archaeological treasures in the country and are now held in the British Museum, there’s an interesting audiovisual display that describes and explains them. Excavation work is still going on at Vindolanda, now under the guidance of the third generation of the Birley family. If I were younger and less creaky I would definitely volunteer for a dig.

In a strange piece of synchronicity, I spotted in the Radio Times this evening that BBC4 were showing a programme called Beyond the Walls: In Search of the Celts, which included sections on both Housesteads and Vindolanda. If you’re interested, it’s available on iPlayer for another few weeks.