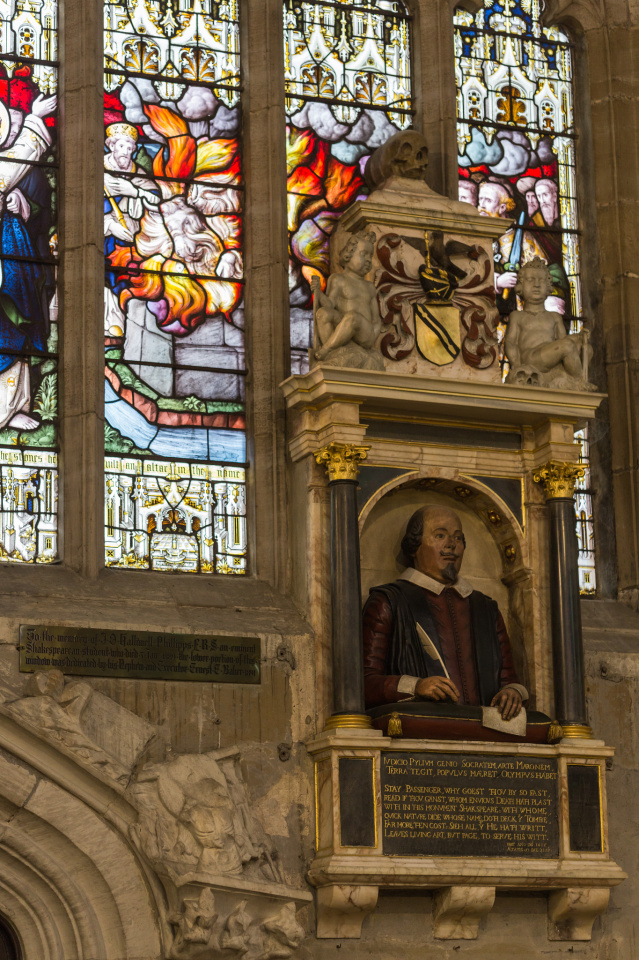 There was a blipmeet today in Stratford on Avon, attended by chantler63, hildasrose, Mr hildasrose, sdg92, Mrs sdg92, JaneW, orchid99, FrankS, and 57Daisies, as well as me. The weather wasn’t very kind to us, so after coffee and a chat we walked over to Holy Trinity Church and spent a while wandering around inside it.

Shakespeare and several members of his family are buried in the chancel of the the church – not because of his fame but because he returned from London to Stratford a very wealthy man, and as well as buying one of the largest and grandest houses in the town (which was demolished by a later owner in what must be one of the most extraordinary examples in history of cutting off one’s nose to spite one’s face), he bought a share in the parish tithe privileges, which included the right of burial in the chancel. The privileges passed to his heirs on his death, so his widow Ann and daughter Susanna are also buried here, along with Susanna’s husband. This memorial was erected in the chancel just a few years after Shakespeare’s death and while Ann was still alive, and it’s therefore believed that it is probably a good likeness.

I’ve put a few more photos from inside Holy Trinity on Flickr, starting here. The tomb effigies are of members of the Clopton family, and are worth a visit to the church in themselves. They and the chapel housing them have recently been restored, which suggests that they must have been in a fairly dire condition previously. There’s also some fine stained glass, which must be dazzling on a sunny day.