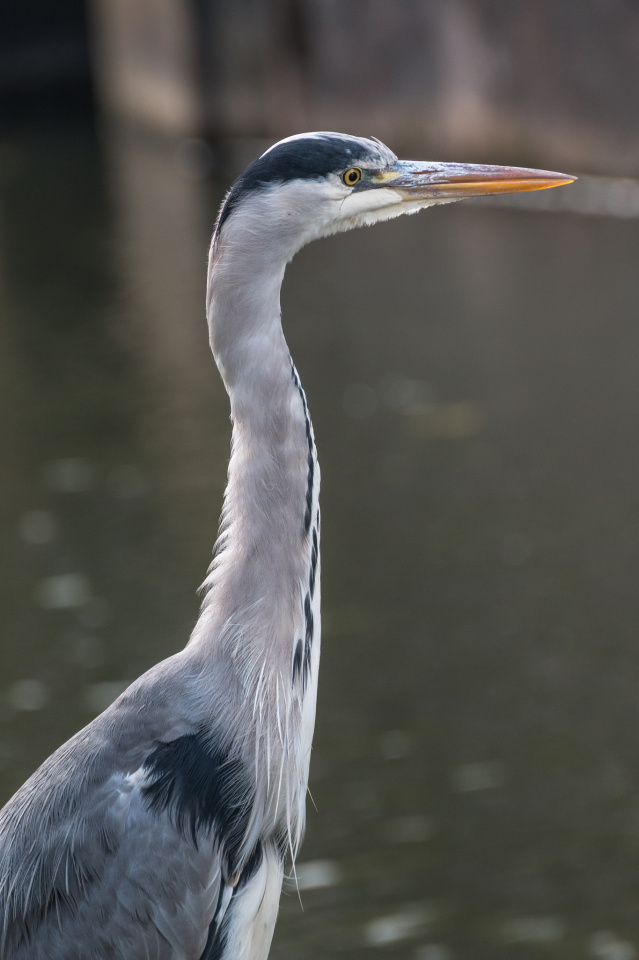 As the weather was good again, I went back to Stratford this afternoon – with a long lens on the camera this time, as opposed to yesterday’s wide angle – and walked the first short section of the Avon Valley Footpath, between Lucy’s Mill and Weir Brake Lock.

As I walked away from Lucy’s Mill a small, stubby bird flew past me, very fast and low to the water. I was facing almost directly into the sun, and didn’t get a good look at it before it disappeared, but from its size, shape and movement I was fairly sure it was a kingfisher. I carried on, hoping to see it again, but for a while I the only thing I saw was a small water bird that I couldn’t immediately identify, walking in some reeds.

Then I came to the Weir Lock, and found myself just a few yards away from this grey heron. The main photo needed a little straightening but is otherwise uncropped, which tells you how close we were to each other. There are some benches on either side of the lock, and I sat for about half an hour, watching it moving around the basin looking for food. The extra shows it about to dive (successfully) from the far bank. 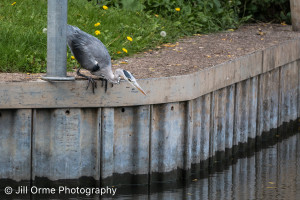 After it finally flew away I decided that I had more than enough photos for today, so I walked back to Lucy’s Mill. As I was between the two bridges, road and foot, which cross the river at this point, I caught the briefest glimpse of a small bird – again moving very fast, but this time in the direction of Stratford. I was standing gazing towards the weir, hoping to see it again, when my phone rang – R had arrived in Stratford after a business appointment, and was calling to find out if I was free for coffee. Then as we were chatting, suddenly a vivid streak of turquoise emerged from the water and flew eastwards along the river.

I wouldn’t say I was excited, but I doubt that R will need that ear syringing any time soon.

It was such a thrill to see it – of course it would have been even better if I’d managed to get a photograph, but I will definitely be back another day!

In other news, the Facebook Moth Man, who also runs this fascinating site, has checked out my moth from yesterday and pronounced it to be a Flounced Rustic – which sounds rather more like a late 1970s women’s fashion trend to me than the wizard that I suspect that moth to be, but maybe it’s travelling incognito….