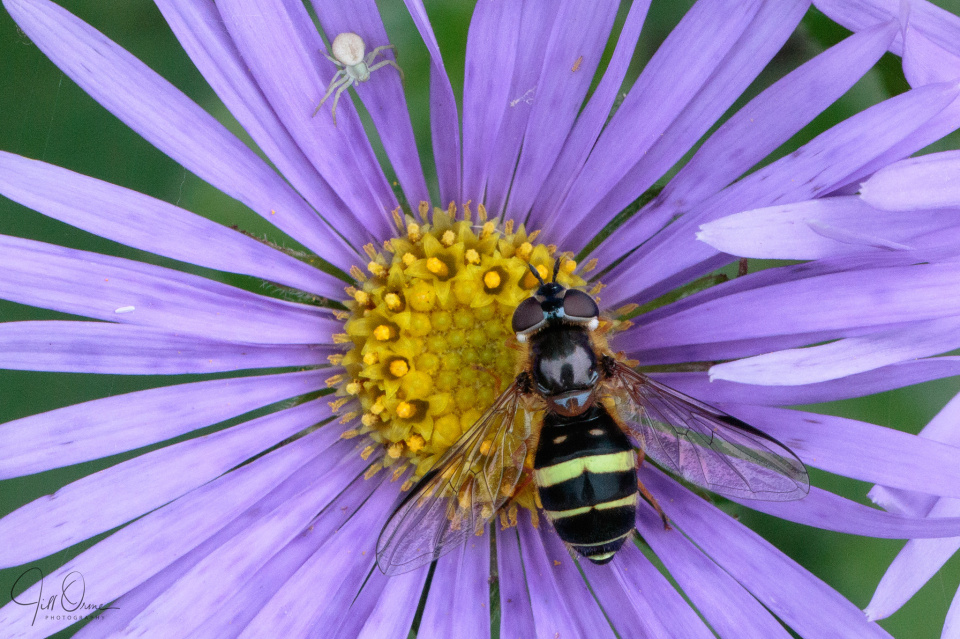 On the final day of this year’s Alternative Olympic Games the style medals were awarded. These events have attracted criticism from the athletes competing in more traditional events, because of the level of subjectivity involved in judging them. “It’s ridiculous,” said one Long-distance Nectarer who wished to remain anonymous. “I mean, there’s nothing to measure, is there? It’s all very entertaining. All very nice – but you can’t call it sport!”

The spectators at the Grace Under Pressure event this afternoon would almost certainly have disagreed with this assessment, as they watched D. Tricinctus of Team Syrphini storm to gold with a stunning routine on the parallel asters. Not only did she have to resist repeated attempts by a rival competitor from Team Eristalini to bodily remove her from the arena (a deliberate disruption which ultimately saw the disqualification of the entire team), but one of the judges appointed to oversee the event was a crab spider, M. Vatia, who chose to observe the proceedings from a vantage point well within striking distance of the competitors.

Several teams made official complaints about the choice of this judge and about her demeanour, but the Committee insisted that they had absolute faith in her; their assertion that M. Vatia had undertaken not to bite any of the athletes during the event, and would instantly lose her judging credentials if she failed to keep this promise, proved less reassuring than they had presumably hoped. Nevertheless, the Committee decision stood; the judge lurked; and D. Tricinctus, with a sang-froid that brought gasps of admiration from the crowd, performed her planned routine as though she were entirely alone on the asters – even though on several occasions this brought her within millimetres of M. Vatia’s fangs. As she completed her final rotation and rose into the air in triumph – and, one must assume, a certain relief – the spectators leapt to their feet and cheered her.