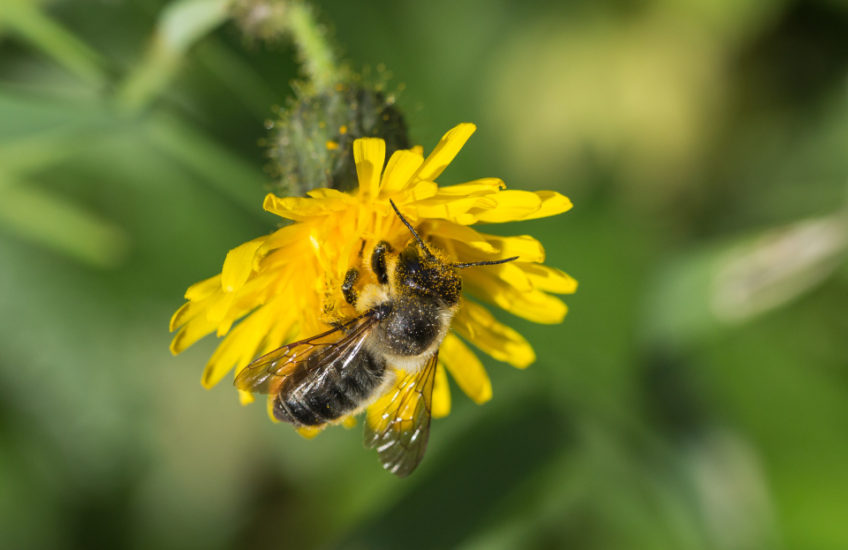 At 7.30am today the conditions were perfect for photographing bugs: it was bright but chilly, with a heavy dew. And where was I, while the bugs were sitting about photogenically, waiting for the sun to warm their dewy wings? I was at home, waiting for the roofers. And waiting. And waiting…

It was 9.30 by the time the Chuckle Brothers arrived, to find me standing in the doorway like Flo Capp. “Oh, sorry” said the spokesroofer, “we didn’t know you were wanting to go anywhere. Your old man said that he’d be out, but the wife was going to be in all day.” Even as I sent a mental thunderbolt northwards towards The Old Man, I knew that it was next to certain that R said no such thing – but it still didn’t improve my temper.

By the time I’d grumpily got them set up with tea, and spoken sweetly to the Band who were just getting up for breakfast, it was well after 10, and my bug walk was largely frustrating: the sun was harsh, the dew had burned off, and everything was warm and active. The only dragon I managed to find was moving so fast I could barely track it, let alone focus a lens on it. But on the plus side there were more hoverflies about than I’ve seen recently, and some quite nice bees.

You might recognise this one from the ginger pollen brush under her abdomen: she’s Megachile centuncularis, the Patchwork leaf-cutter bee. I blipped a fresher specimen a couple of weeks ago, but I couldn’t resist this rather celebratory shot today. There were several individuals working this tall dandelion (which I think is sow thistle, though wild flowers aren’t really my thing), which they do with a kind of twizzling motion, designed to stir up the pollen so that it sticks to their abdominal hair (and pretty much everywhere else too, as you can see). They then return to their nests, where they clean off the pollen and leave it as food for their larvae. It’s now quite late in the season for these bees, and they’re looking rather worn; as soon as they have completed their nests they will die.

The extra is a Platycheirus hoverfly, and I’m told that it’s probably P. scutatus. I confess to being pretty pleased with the photo, which is the best of a set of five good-though-not-perfect shots I took of the same centimetre-long bug. I was going for focus on the eyes, which I achieved, but I was right at the inner focusing distance of my lens so the depth of field is extremely shallow – and he was moving about too much for me to be able to think about focus stacking. 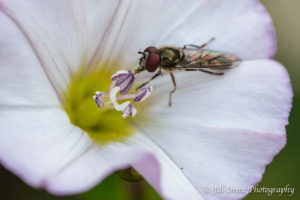