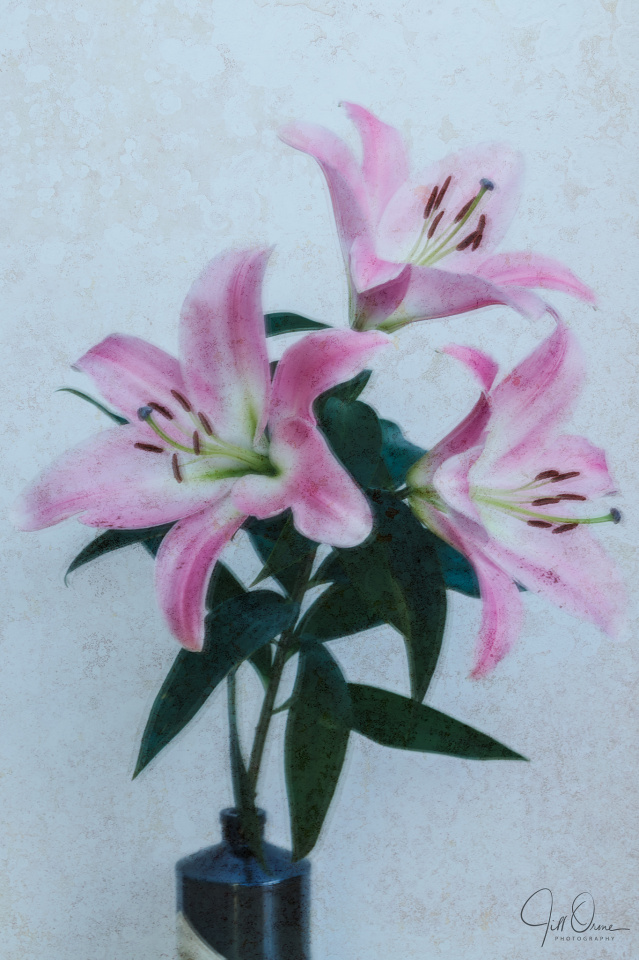 This is a fudged entry, in the sense that all of the six images that went into it were shot yesterday. But the process of constructing an image in Photoshop was done this afternoon, which as far as I’m concerned makes this today’s photo.

I knew that I was going to struggle to take any shots today, because it was concert day for Campden Festival Chorus – and as it happened the weather was vile, which meant that the town and church were not photogenic when I went over for final rehearsal this afternoon. In fact I did take some phone photos as I arrived, of our lovely young bass soloist chatting to some of the altos – I love it when the talent is happy to mix with the ordinary mortals – but none of them was especially good, and anyway there’s a kind of unspoken rule that What happens in rehearsal stays in rehearsal… so I decided to fall back on the lily shots I banked yesterday. I mashed them and added the overlay while dinner was in the oven, which allowed me just enough time to eat, shower, and trowel on some slap, before rushing back over to Campden for the concert.

Which was a blast, I’m happy to tell you. The altos completely missed one of our entries in the Charpentier, which was a little stressful – but luckily the sopranos picked up the line and ran with it, and we managed to chase them down and catch up by the end of the section. And after all the stress, the Finzi was lovely – including the bell section, which is really hard – and the Vaughan Williams made me want to come home and hang the Christmas decorations and mull some wine. So: all very satisfying – and more importantly, the audience seemed to have a pretty good time.

This is what we sang:
Charpentier: Messe de Minuit
Finzi: In Terra Pax
Vaughan Williams: Fantasia on Christmas Carols