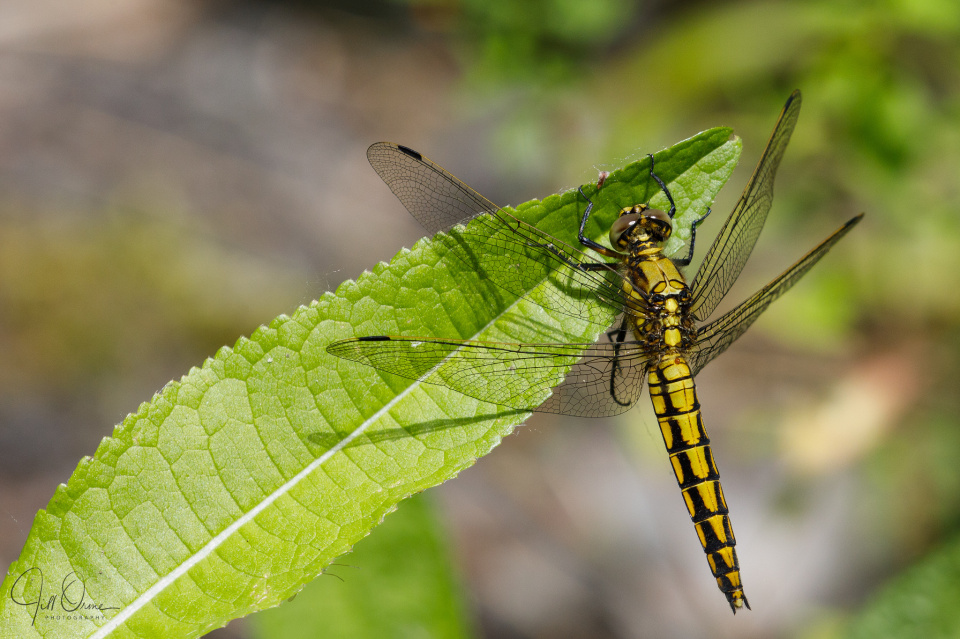 I had such a productive session at Lower Moor Farm today that I’ve struggled to decide what to post tonight. In the end I’ve chosen this lovely fresh female Black-tailed Skimmer, because it’s the first time I’ve ever captured a decent portrait of one: in common with a lot of other female dragonflies, they keep themselves pretty much to themselves, staying away from the watery areas patrolled by the males unless they’re actively seeking a mate, or ovipositing.

My extra shows a male that had established a territory on the edge of one of the lakes, and selected a floating log as his preferred perch; he made frequent flights out across the lake, but returned to this exact spot after every one, and luckily for me it was close enough to the bank for me to photograph him with the macro lens. The main image, though, is a long lens shot – I was walking along a gravelled track when the female flew past me and came down on this leaf, and I only managed half a dozen frames before she was bounced off it by a damselfly, and disappeared into the woods.

At the end of my tour of Lower Moor I found myself in the education area, where there are two small ponds, chatting to three fellow Odonata fanciers and exchanging lists of what we’d seen. I said it was odd that I hadn’t seen any darters today, as it’s over a week since I photographed a teneral Ruddy Darter quite close to the spot where we were standing. One of the chaps expressed the kind of surprise that really means they think you don’t know what you’re talking about – and to be fair, it is a little early for these small dragons to be out – but a few minutes later, after taking a last turn around the area, I happened on the three of them again, all standing on a pontoon over one of the ponds, and peering at something. “There you are,” said one. “Is this your Ruddy?”, and when I stepped onto the pontoon and squinted at the hand rail, there was a male Ruddy Darter in all the glory of his mature colouring.

He wasn’t keen on having cameras stuck in his face, and kept jumping about, but in the end I did get a shot I liked, and which would probably have been my blip, but for the skimmer. But he then disappeared, and when I turned round I found him hovering over the big camera, which I’d left lying on the ground. He wanted to perch on the pale lens barrel, but slid off it several times before working out how to balance himself – if I’d had my wits about me I’d have tried to video this scene with my phone, because it was quite amusing, but all I thought to do was to get a still with the macro once he’d finally settled. I’ve put both the portrait of him on the rail and the shot of him on the lens onto my Facebook page, if you’re interested; even though I know how small these dragons are, I was still somehow surprised by how tiny he looks in the context of my camera gear.