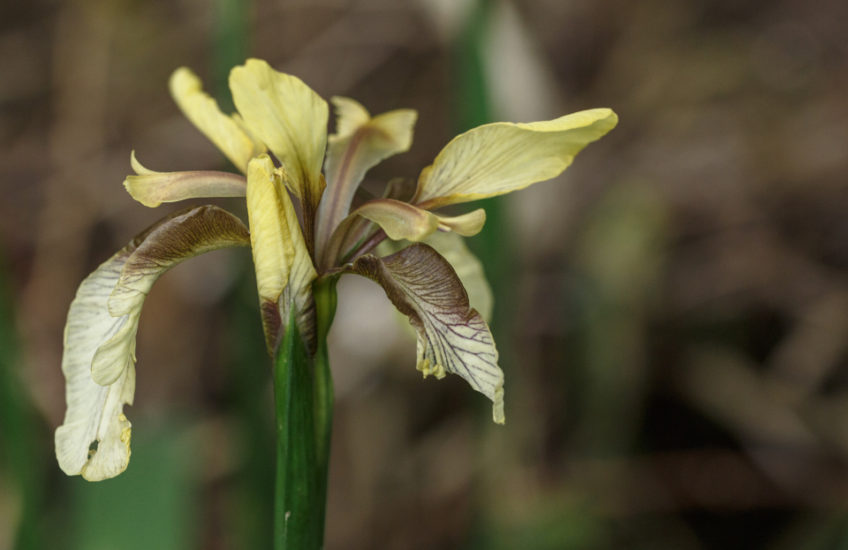 Such a charming word, isn’t it? Foetid…. it conjures up all manner of unpleasant images.

This is Iris foetidissima, otherwise known as stinking iris, which is one of only two species of iris native to the British Isles, the other being the yellow flag iris. It gets its name from the fact that when it was named (at a time when it was used as a medicinal herb) the leaves were said to release an unpleasant odour when crushed, reminiscent of rotting meat. That seems to be disputed now, and I don’t know whether or not I would agree with the judgement because I’ve never tried it – all parts of the plant are toxic, at least to the extent of causing gastric upset when ingested, so I’d rather not take the risk of getting the sap on my hands.

It’s commonly said among dog owners that you should avoid having stinking iris in your garden at all, because it can be fatal to dogs if they eat it – but while researching for this post I failed to find any reports of actual dogs having been harmed in this way. In the autumn it produces showy orange berries, and I suppose that if they smell of meat they might just attract a dog’s attention, but our village (and indeed our garden, despite my best efforts across the years to get rid of it) is riddled with the stuff, and neither Arthur nor Roley ever gave it so much as a sniff.

Despite having numerous clumps of it around the place, especially down in the woodland garden, this is the first year when I’ve actually seen any flowers, and I’m really quite taken with them. All of mine are yellow, but apparently the flowers are very variable, and different varieties cross-pollinate readily to produce new forms. If you’re charmed by it and not worried about its toxicity, there are a number of on line nurseries that sell it; it’s clearly quite robust, given that it tolerates the miserable limey clay of Worcestershire, and it naturalises quite readily if you allow it to wander at will.

And if you’re of a naturopathic disposition, there are people who continue to recommend its use as a medicinal herb. I should probably make it entirely clear at this point that I am not one of them.