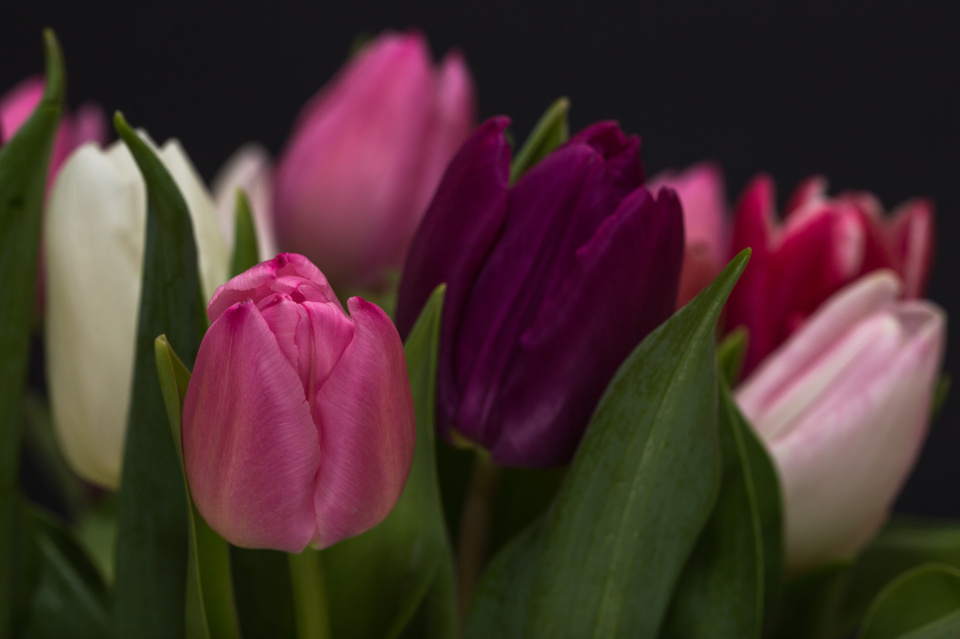 The weather this morning was quite promising, so when I went to town to have lunch with my friend P I took the camera, thinking that I’d be able to get some shots at the river on my way back to the car. But we hadn’t been in the restaurant long when the rain started, and within a short while it was teeming down and people coming in from outside were shaking themselves like wet labradors.

We were already well into the process of putting the world to rights, so we just stayed put and kept doing it – in the end we were there for nearly three hours, which isn’t bad going for a one-course lunch. Luckily by the time my car park ticket was about to expire the rain was easing, but it was still blowing a cold, wet gale when I crossed the Tramway Bridge, and there was no time for me to take photos even if I’d fancied unpacking the camera.

I stopped at the supermarket on the way home and picked up some tulips and anemones with a view to taking a Flower Friday shot – but by the time I’d reached home, sorted out my own supermarket order and walked Arthur as far as he was prepared to go in this weather, it was pitch dark. This presented me with a bit of a problem, photography-wise.

I read an amusing thing recently about the things photographers say, and what they really mean, and the one which went

Says: “I prefer to use available light”
Means: “I don’t know how to use off-camera flash”

struck a particular chord with me, because I’ve been meaning to get round to learning flash for about two years now, and completely failing to do it. One of R’s presents to me this last Christmas was a Youngnou flash unit – but despite having had it for a month, I still hadn’t done more till this point than unpack and admire it.

But having painted myself into a lack-of-blip corner I didn’t have a lot of choice, so I applied the flash to the camera and opened the instructions. Youngnou is a Chinese company, and the manual might as well have been written in Mandarin, for all the good it did me – I understood various of the individual words, but put together they formed an unintelligible soup. After floundering about in the soup for a while, and taking various test shots which completely failed in various ways and for reasons beyond my understanding, I fetched the camera manual and read the flash section in that – it was easier to understand, but the flash unit didn’t seem to be behaving as the Canon manual said it should. At one point I became convinced that it was faulty, and only the thought of  having to explain to R that I’d only just discovered this, a month after receiving his gift, impelled me to keep trying.

By this point in the narrative those of you who regularly do flash photography are probably quite bemused. I can almost hear you thinking:

Part of my discussion with P over lunch was about the danger as one gets older of stopping doing things that might be a bit tedious or a bit difficult or a bit uncomfortable, and winding up just sitting in an armchair with a book in one’s pyjamas because it’s nice and it’s easy. Remembering this, I gave myself a metaphorical smack around the head, re-read everything…. and suddenly it all worked properly and I couldn’t even really be sure what I’d been doing wrong in the first place.

So there we go – I apologise for making the taking of this photo sound like the climbing of the Matterhorn, but as we all know by now I do like to make a drama out of a crisis. Or indeed, something less than a crisis. For the record, this was shot on the ETTL setting (i.e. auto), with +2 compensation because the ceiling off which I was bouncing the flash is about ten feet up.