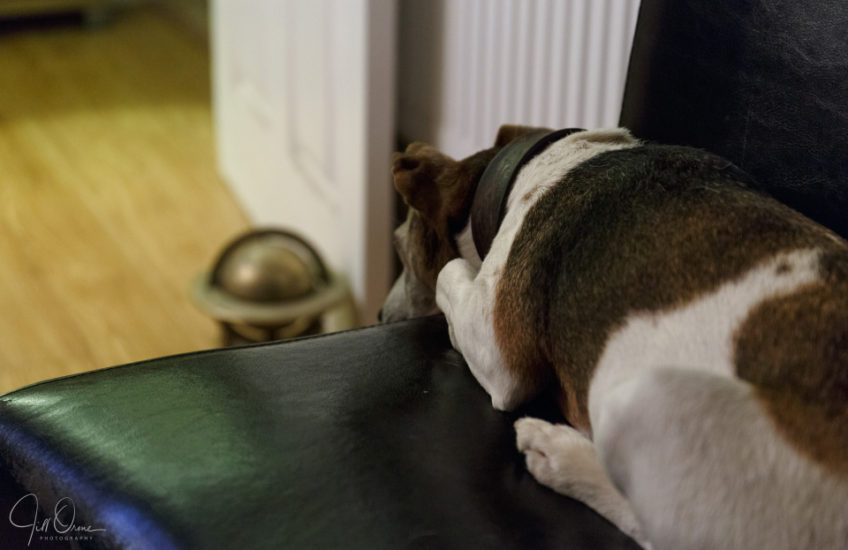 R and I had a thoroughly lovely day today, visiting my sister, brother-in-law and younger nephew (the elder being away at uni – though how he got to be old enough for that to have happened is a total mystery to me). We’ve eaten ourselves to a standstill, while talking ourselves almost hoarse – which is pretty much my definition of a perfect Sunday.

This is Poppy, the Parson Jack Russell terrier, who at thirteen has perfected the art of multitasking: in this shot she’s guarding the family against squirrels or other dangerous intruders, while keeping a managerial eye on my sister’s execution of her hostess duties, and simultaneously impersonating a meatloaf. (I should probably point out, because I know there are people who care about these things, that she wasn’t on that chair while we were eating, but came to check us over afterwards and decided to stay and join the conversation).

Poppy came to stay at our house for a week when she was still a very small puppy, because her own family went on holiday and as she wasn’t yet old enough to have had her final vaccinations she couldn’t go too. Arthur was extremely tolerant of her, because he liked everyone unless they gave him a reason not to, and being a hound he was always happy to expand his pack. Roley…. didn’t care for her much, but understood and just about accepted that not tolerating her wasn’t going to go down well with me – so he threatened her quite a lot (which she totally ignored), and spent a fair bit of time sulking in his basket.

Poppy herself (though presumably a bit bemused by the sudden change in her living arrangements) seemed quite content to be with us, except when I took the boys for a walk and she was left at home alone for thirty or forty minutes. Whenever that happened she got herself into a total tizz, so after a couple of days I rigged up a kind of front sling that I could put her in, and took her out with us. She was then perfectly happy, and the other village dog walkers were vastly entertained.

When my sister and her family arrived to pick her up, Poppy was so excited that I thought she might do herself an actual injury – so it was clear that she was perfectly sure who her proper people were. But over the intervening years it’s also been clear that something about that week imprinted our family in her mind as belonging to her too – I’m sure she doesn’t miss us a jot when we’re not there, but when we are she treats us as family, and my sister says that she greets us differently to other visitors.

Which is really rather sweet.