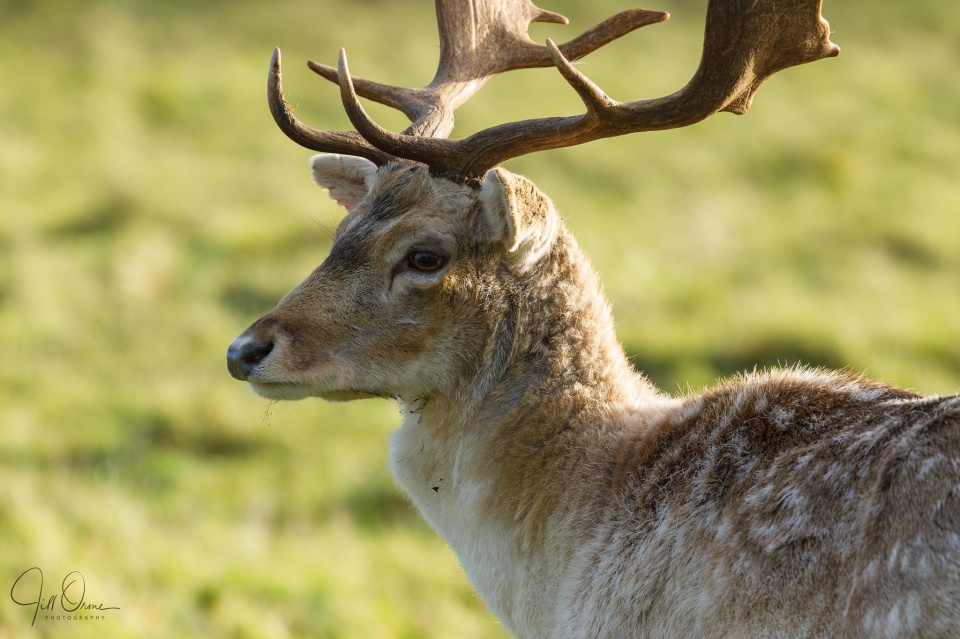 Neither R nor I was keen on the early start we needed this morning to allow us to take up our 9am Charlecote tickets, but in the end we were glad that we’d dragged ourselves out of bed. When we left home the morning was still fairly gloomy, but by the time we arrived, as you can see here, the estate was bathed in brilliant sunshine. The cloud cover was back by 10am though, and it stayed for the rest of the day.

No shooting was taking place today, but I think the cull is still in progress because the herd is clearly very nervous and unsettled. When we arrived a group of bucks were straddling the path that runs alongside the wall between the garden and Front Park, and we had to pick our way round them; they were almost too close for photos with my long lens, and R commented that this was the first time he’d ever been close enough to the deer to smell them. This is one of the younger and more handsome bucks, but even he has some nicks and scrapes from sparring; others have suffered much worse damage during the rut, and are carrying obvious wounds even now.

In West Park there was an unusually large group in the sanctuary on the north side of the carriage drive, behaving as though they hoped there was safety in numbers. I’d estimate that there were several score of individuals – mainly does, fawns, and prickets, but also some bucks, which I don’t expect to see mixing with the females outside the mating season. A couple of young bucks were sparring in a desultory fashion, but by then the light was too poor for decent photos. I had a little more luck with the group of does I’ve posted to the extras, whose attitude illustrates the anxiety I’ve been describing. These are melanistic does, the darkest of the four colourways in the herd. 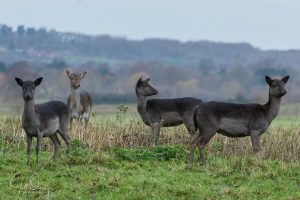 There’s a page here about the Charlecote deer, though I don’t think it was written recently because I’ve seen the figure of 65 fawns quoted on a blog that someone posted a couple of years ago. It avoids labouring the point, but makes clear that this is a managed herd, and that during the winter some of its members wind up being sold as cuts of venison.