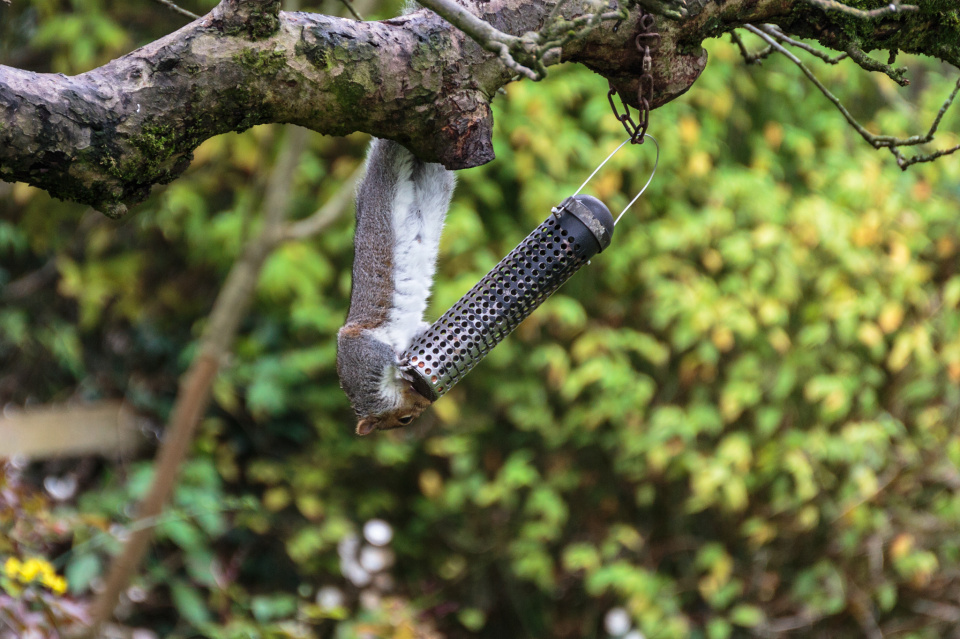 It was another murky, cold, drizzly day today – not conducive to getting out and about with the camera. Instead I did more work on my web site, tidying up the photo galleries, and made grape jelly. Because at some point a photo had to be taken I left the 5D in the kitchen with my longest lens on it, in the hope that sooner or later an interesting visitor would turn up in the garden.

A greater spotted woodpecker came to the peanut feeder several times during the morning, but never stayed more than a few seconds; I assumed that I kept disturbing it by moving around the kitchen, until this little scene occurred. The squirrel came across the lawn, climbed the apple tree, checked out the seed feeder and found it emptier than he liked, retreated to the large branch in this photo and sat there grumpily for a minute, then swung down (holding on by his back feet) and picked up the peanut feeder – clearly indicating to me that I had failed in my primary role as Provider of Free Nosh.

The extra shows him a couple of minutes later, back on the lawn and gazing up at the feeders in frank disbelief that there could be so little food in either of them. Then he left.

I refilled the feeders this afternoon and the woodpecker came back, but though I got a few shots, it was so dark by then that I had to push the ISO to 4000 – high even for the 5D – and by the time I’d cropped in and smoothed them I didn’t like any of them enough to post. And at least you can see now why our peanut feeder is chained to this large branch: every time we’ve put it on a smaller one the squirrels have gnawed through the wood until the branch broke, then removed the feeder to a place of safety and gone with it to make sure nobody disturbed it.

I say all of this as though I mind – but actually I think we all know that I find squirrels quite entertaining. Occasionally people say words like “rodent” to me about them, but I just roll my eyes. Even Roley the JRT knows the difference between a squirrel and a real rodent: the latter are for killing, and the former are for chasing at a discreet distance so that you’re in no danger of actually catching them. The only time he did catch one he failed to get a death grip on it, and after a few moments of utter panic while the squirrel tried to twist far enough round to get its teeth into him and he tried to work out how to avoid this happening, he came to a very sensible decision and simply spat it out. Honours even, he decided to retire from squirrel catching while he was (not quite) ahead.

If we had native red squirrels round here it would be a different story, of course – I’d be on the phone to the rat/wasp/ant man every time I caught sight of a grey. But Worcestershire is so far from anywhere [s]sensible[/s] that has reds that there’s absolutely no point in me declaring war on the greys – so I shan’t.