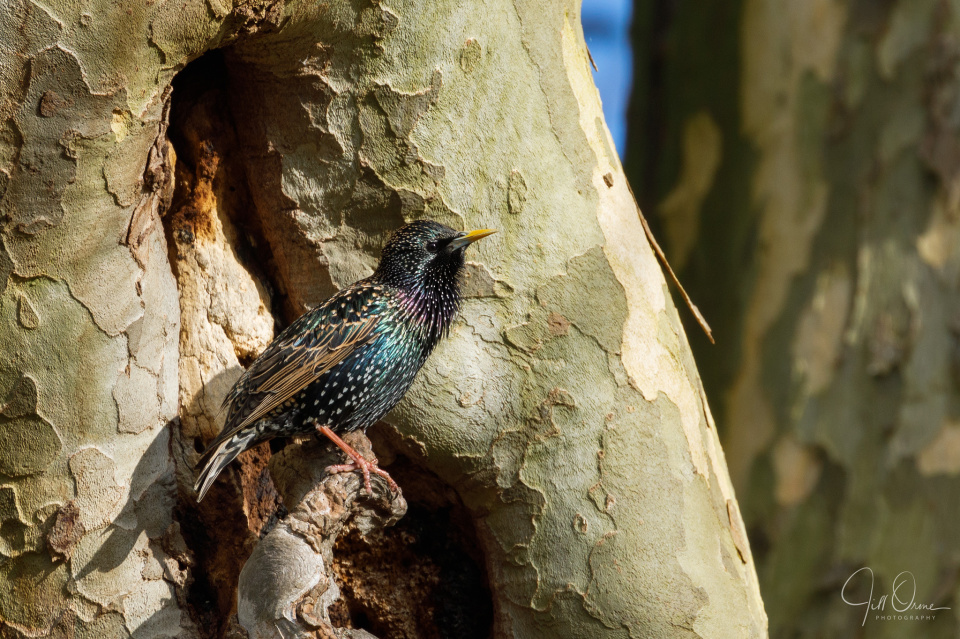 Most people know that starlings aren’t as drab as they tend to appear in flat winter light, but you have to be lucky to catch one as well-lit as this. I was alerted to this individual by the fact that it was making a kind of chittering noise – half way between a chatter and a rattle – and when I looked up I was charmed to see what R described as its extravagant plumage, set off by the lovely plane tree bark behind it. The RSPB describes the starling’s call as consisting of “harsh and rattling notes, including wheezy warbling and musical whistles,” as well as mimicry of the calls of other birds, and man-made noises such as telephones; and notes that the call is often accompanied by the throat feathers being fluffed up, as you can see happening here.

The fact that the starling is sitting on a plane tree will probably have suggested to you that this photo wasn’t taken in our garden – though technically we do have room for a plane tree, and the idea of planting one is…. tempting. Anyway, as I feared it would, our lane did flood again overnight, but not as deeply as yesterday, so we had no trouble getting out in R’s car and taking ourselves off for our appointed walk at Croome. (I wouldn’t have attempted it in the MX-5, which was still sitting in a large puddle in the back yard.) Croome had also suffered some flooding, but we’d anticipated that and brought wellingtons, so we were able to walk all the way round the inner circuit of the park and enjoy the space, the fresh air, and the sunshine, without getting our feet wet.