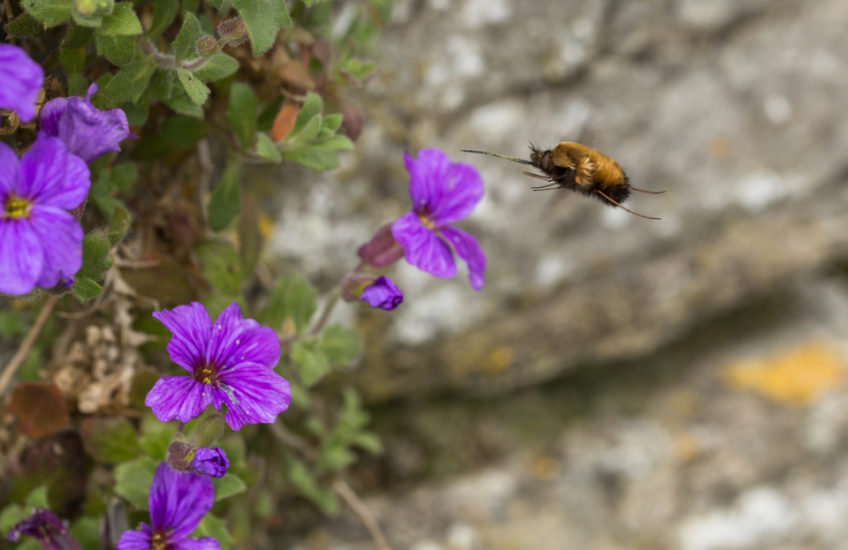 Looking, I think, like a tiny, furry narwhal. If you have the time, please do look full-screen.

I daresay my garden has harboured bee-flies for donkey’s years, but I spotted my first one ever about a fortnight ago. That was Bombylius major, the Dark-edged bee-fly (so called because its wings have a distinctive dark fore-edge); but this is the much rarer Bombylius discolor, or Dotted bee-fly. It’s so uncommon in fact that I’m almost doing the Crash Bandicoot dance to have found one – although I really shouldn’t be so celebratory about it because they have rather nasty habits.

Female bee-flies hang about near the nests of solitary bees, especially the Andrena mining bees (of which I have several species), and flick their eggs into the nests while they’re unguarded by the female bees. After hatching, the bee-fly larvae apparently wait until the “host” solitary bee grubs are well grown – and then eat them. On the plus side, it’s said that you have to have a thriving colony of solitary bees for bee-flies to be able to survive; their numbers crashed in the 1960s and 70s when intensive farming practices nearly wiped out some solitary bee species, but they have been making a steady come-back over the past twenty years.

Although the larvae are parasitic, adult bee-flies eat nectar – this male was feeding from the aubretia growing in the top of my garden wall – and fly with the proboscis extended as you can see here. This little chap didn’t come fully to rest even once during the time I was stalking him, which is a pity because I’d have liked you to see his wings, which are rather prettily spotted. There’s a fact sheet here if you’d like to know more.