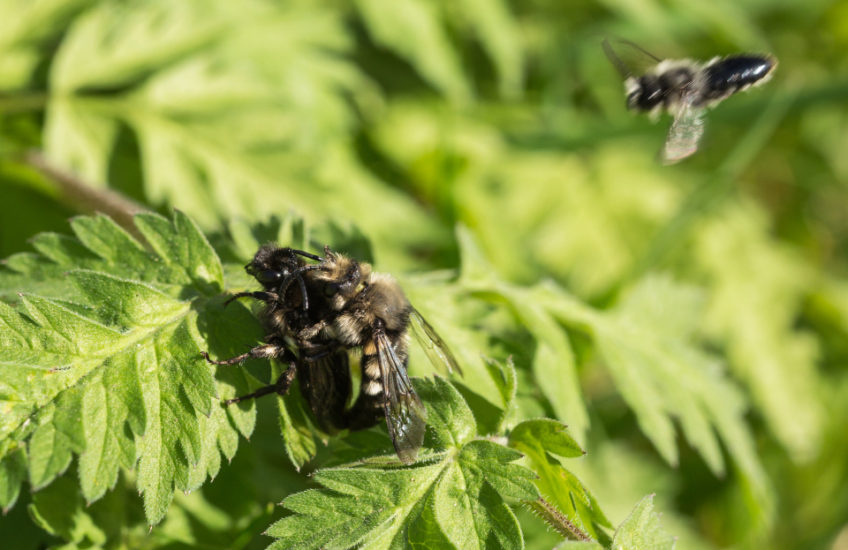 So there you are, minding your own business and doing what comes naturally, when firstly some idiot arrives with a camera and points a huge lens at you, and then the neighbours get uppity. It’s a good thing you have six legs for hanging on with.

I had been going to post a wide angle shot today – R and I went for coffee and cake up at the Broadway Tower this afternoon, and I have some views from there that I really rather like. But when we got home the bugs were out in force, so I went out to do some recording – and as soon as I saw this scene I knew I’d be hard-pressed not to post it. Lest you get the wrong idea, the dive-bomber isn’t trying to join in here: the two caught in flagrante are Melecta albifrons, the white-faced cuckoo bee, and the incomer is Andrena cineraria, the ashy mining bee, who simply doesn’t care for stuff happening on his patch. A few minutes earlier he’d behaved in exactly he same way towards a huge Bombus terrestris queen – and seen her off – but despite him making repeated attacks here, M. albifrons was intent on finishing what he’d started.

I’ve put in an extra today, because I’m aware that one or two people haven’t seen it – but please accept my apologies if you have. For some reason my arthritis has just flared and I was sitting at my desk this morning in a sore and grumpy heap, when I suddenly began receiving congratulations from friends who’d seen the results of the IGPOTY Monochrome Photo Project competition go up. To my absolute delight my photo was Commended, and I’m sure you can imagine the lift this gave me – it would be fair to say that my horrible joints were pretty much forgotten. All the award winners can be seen here. 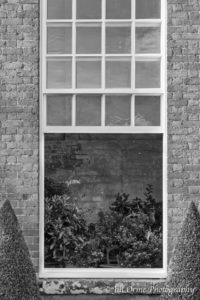 The last thing I want to mark in my journal today is the news of the death of Victoria Wood – she was hugely talented, and I’m very sad that she has died. R and I saw her on stage once, and had the most wonderful evening – I always expected that at some point we would go to another of her shows, and it’s hard to believe that that can never now happen. I’m not in the habit of speaking to slebs in the street, but one day a few years ago I saw her dropping her son off at the Guildhall in London (as R and I were also doing with Child Two at the time), and I went over and thanked her for the very great pleasure she’d given me over the years; she somehow managed to be gracious while looking mortified with embarrassment, so I think she must have been a pretty private person in civilian life. A great loss.