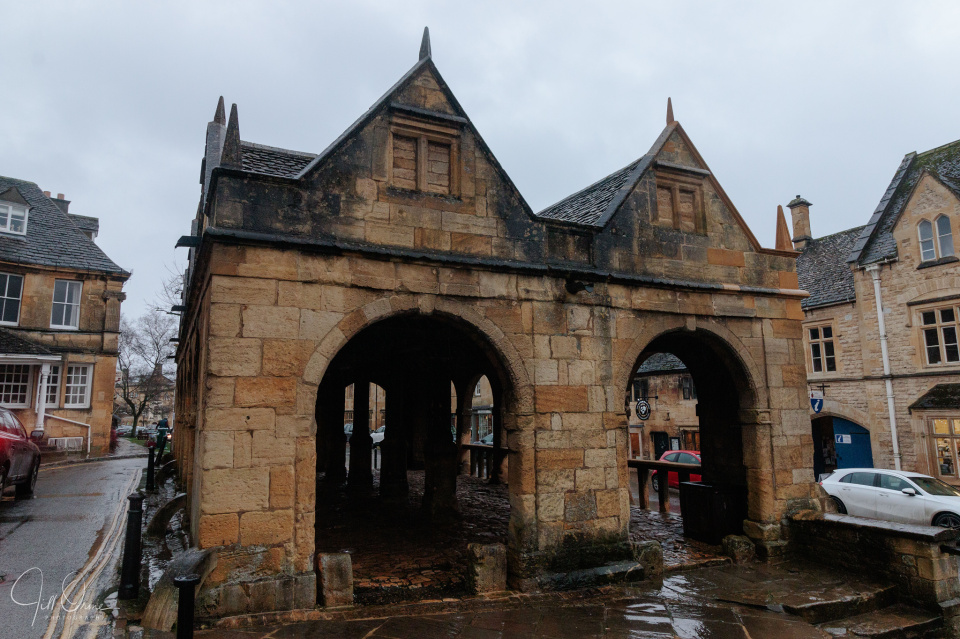 Having been kept inside all morning by the weather, R and I were chewing the door frames, so we decided to brave the hostile elephants and go to Chipping Campden for a squelch around and some coffee. The best that can be said of the experience was that the town was unusually quiet.

This is the famous Market Hall, built in 1627 by Sir Baptist Hicks, of whom I’ve written before. He was a wealthy London cloth merchant, who bought the manor of Chipping Campden in the early years of the C17th and proceeded to lavish large amounts of money on the town, building a fabulous manor house (burned down 40 years later during the Civil War), a row of almshouses, and this market; he also funded various improvements to the Parish Church, and paid for the repair of the grammar school. He and his wife are buried in an ornate tomb in the church.

The Market Hall wasn’t a cloth hall (the local cloth merchants had their own exchange in the Woolstaplers’ Hall), but was intended to allow farmers and cottagers to sell their produce under cover. Being right in the middle of the town it was – and is – an important focal point for the community, so it’s almost impossible to believe that after the Second World War it was put up for sale. It was on the point of being sold to an American man, who intended to have it dismantled, shipped across the Atlantic, and re-erected in the USA, when the Campden Trust managed to buy it. It’s now in the care of the National Trust.

Just over a year ago there was a bit of an incident, when the JCB that had brought in the town Christmas tree collided with the Market Hall, causing quite a bit of damage to the roof and to the right-hand gable in this photo. Luckily in this area there are conservation masons with the skills to repair heritage buildings (Cotswold stone is soft, and wears quite badly over time), and the National Trust had the Market Hall restored within a few months. The new stone is already beginning to weather in – unsurprisingly, given all the weather it’s been receiving lately.

There are some rather nice old photos on the Chipping Campden History Society site, if you’re interested.