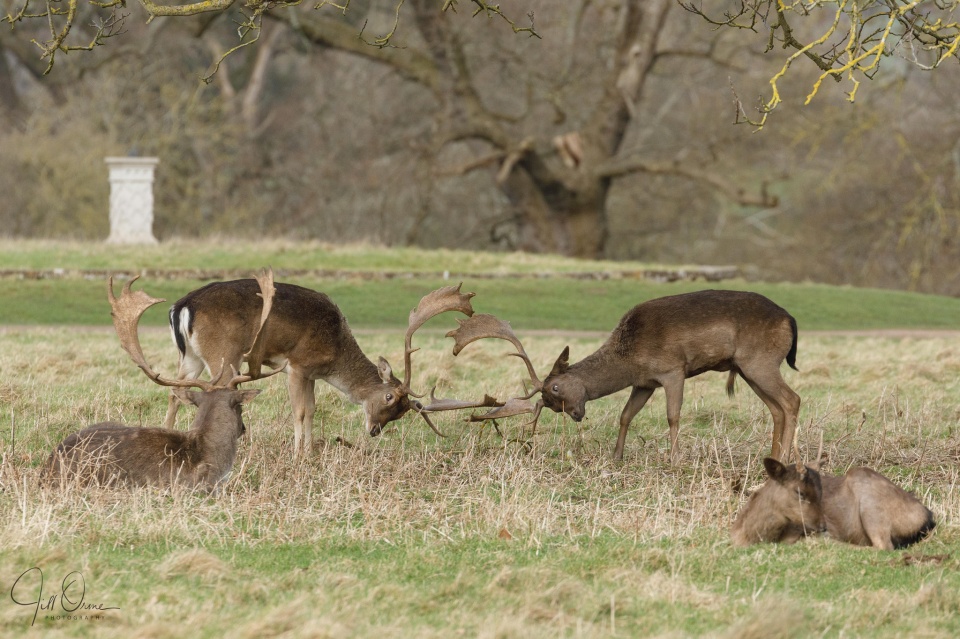 You can see from their posture that they weren’t really putting much effort into this – there was certainly no animosity involved, and frankly I think they were doing it more out boredom than anything else. No-one else in the Boys’ Club was remotely interested in their shenanigans.

As you may have guessed, R and I went for a walk at Charlecote this morning, where much of the park is still annoyingly inaccessible, though they say they hope to open it all back up next week. The most interesting thing we saw was a gathering of herons on the bank of the Avon, some of which are shown in today’s extra. There are four grey herons and four little egrets in that image, though you may have to squint a bit to see them all. A little way along the bank there were three more grey herons, and two others flew in as we watched, circled the area, and landed in one of the trees on the other side of the river. 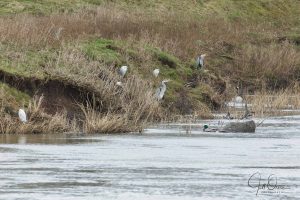 Herons are generally solitary outside of the breeding season, and once they have young they’re obviously too busy to loiter about like this, so I guess this aggregation must have been a kind of prelude to the breeding season starting. Certainly the way they were standing close together while studiously avoiding looking at each other put me very much in mind of school dances. Grey herons tend to build their nests in groups, high up in stands of tall trees known as heronries; little egrets nest in smaller trees and bushes. The heronry at Charlecote is well known, though I’ve never managed to get a sight line on it, but I’ll be keeping an eye out for nesting activity over the next few weeks, and hoping at least to see building materials being moved around.

Over on my Facebook page I’ve posted a lucky capture of two of the four little egrets, which had been standing together in the deer sanctuary but then decided to cross the river to join the others. I had a takeaway coffee in my hand at the moment when they suddenly took off, and I knew the camera wasn’t set up for flight shots, but I never can resist a flying heron, so I thrust the coffee at R and just managed to get both shutter speed and focus in time to bag the shot.