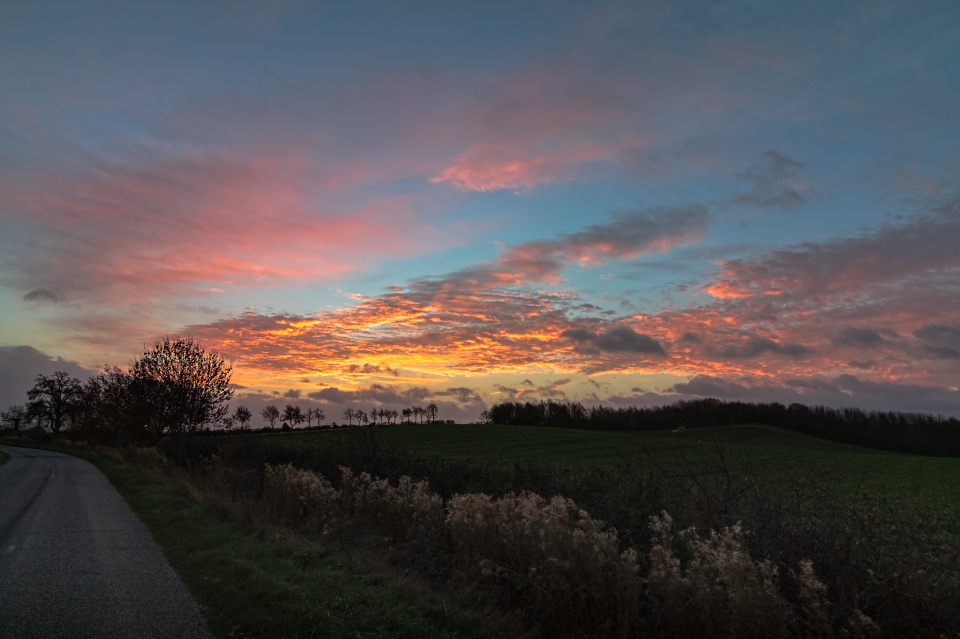 At 7.15 this morning I was standing at my study window, looking to the east and coming to the conclusion that the large bank of low cloud in front of me meant that I wouldn’t get any dawn shots, so I might as well forget it and go and have breakfast. Then I realised how quickly the cloud was moving, and glancing round to the south I saw a break in the cloud bank, which I calculated would arrive within a few minutes. So I grabbed my cameras, got in the car and went off to Shine Hill.

I hadn’t taken a tripod, so I just took a few hand-held shots, exposing some for the sky and some for the ground, and then packed up and went home. By shortly after 8am I was at my desk, playing with layered exposures in Photoshop; much growling and muttering was involved, and deleting of layers and starting over, and wondering if a different hobby wouldn’t be more sensible, but in the end I produced three images, each merged from two exposures, which work reasonably well if you don’t look too closely at the interface between the layers. I’m sure I’ll get better at working with Photoshop eventually, but at the moment my learning curve looks more like the Myth of Sisyphus than anything else. Old dogs, new tricks, etc., etc.

This image is the only one I kept that comes from a single exposure – but I won’t bother trying to tell you it came out of the camera looking like this. It was processed through Lightroom into Photoshop, then through Topaz Clarity and Topaz Detail; then had levels and curves stuff in Photoshop again, before going back into Lightroom for a final bit of faffing. Then I decided I’d done too much to it, so I ditched the tiff and started over. It probably took me longer than the three merged shots together, but it’s my favourite of today’s images because of the composition and the colours in the sky.

OK – so: Tiny Tuesday. I counted 85 entries this week besides my own effort, and again there were some lovely shots. It didn’t take me very long to award my five hearts for the week, because there were five images that really jumped out at me, but I have quite a lot of Honourable Mentions to hand out, and I’ve also given some stars to other shots that I liked as I was viewing all the entries.